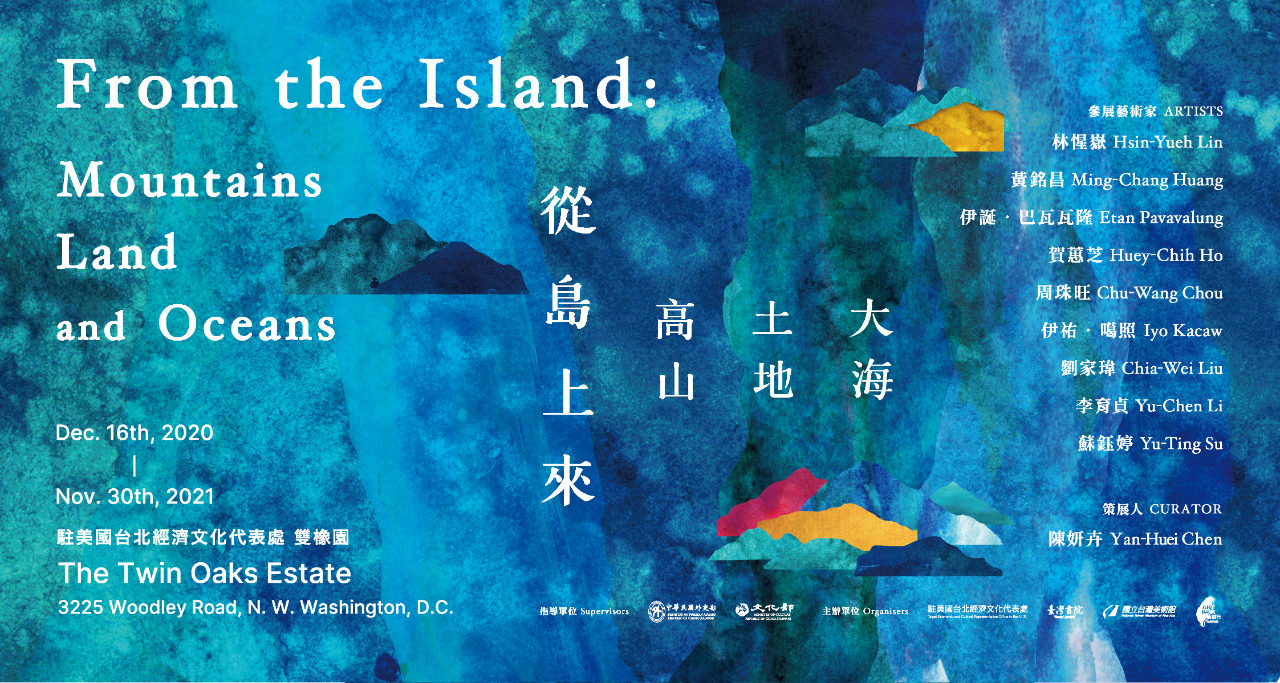 Fourteen nature-inspired works by nine Taiwanese artists of different generations are on display at the Twin Oaks Estate in Washington, D.C. Titled "From the Island: Mountains, Land and Oceans," the exhibition, which will last until November 30, 2021, currently can only be viewed online, since the venue is not open to the public to comply with D.C.’s COVID-19 regulations. A detailed booklet and QR code voice guide are available on the web site of the Taipei Economic and Cultural Representative Office in the United States (TECRO). By scanning a QR code, visitors can view the exhibition and listen to an audio guide in either Chinese or English.

Hsiao Bi-khim (蕭美琴), Taiwan's representative to the United States, stated that she has made it a priority to enhance Taiwan's cultural visibility since she was appointed to this post. This is the second large-scale exhibition hosted by the Twin Oaks Estate to display works of Taiwanese artists, and it is hoped that the exhibition can provide an opportunity for American people to gain a better understanding of Taiwan’s geographical environment and cultural scene, she added.

Art Bank Taiwan indicated that "From the Island: Mountains, Land and Oceans" exhibition shows the perspectives of nine artists towards Taiwan's nature from 1930 to 1980. In setting up the exhibition, the curator drew inspiration from an essay -- "Homeland of the Clouds (雲的家鄉)" by acclaimed writer Xiang Yang (向陽). Describing the sight of first sunshine on top of the Jade Mountain at daybreak, he wrote: "The cloudy and foggy mountains are the hair and skin of this beautiful island. Here we stand, no longer shivering, welcoming the first sunshine that visits Taiwan while she is waking up. The morning sun will rise over the eastern ocean."

Organized by the Taipei Economic and Cultural Representative Office in the United States and Art Bank Taiwan and sponsored by the Ministry of Foreign Affairs and the Ministry of Culture, the exhibition presents master pieces by artists of different generations, including "Valley" by Hsin-Yueh Lin (林惺嶽), "Yushan" by Heuy-Chih Ho (賀蕙芝), "Wandering" by Chia-Wei Liu (劉家瑋), "Breeze over Coconut Trees" by Ming-Chang Huang (黃銘昌), "Lilies That Look at Distant Place" by Etan Pavavalung (伊誕．巴瓦瓦隆), "Shuanglian Reservoir," "Mt. Qixing," "Fuguei Cape," and "LaoMei Green Reef" by Yu-Ting Su (蘇郁婷), "Stone Islet" by Chu-Wang Chou (周珠), "The Messages of Fish" and "Diamond of the Sea" by Iyo Kacaw (伊祐．噶照) and Yu-Chen Li's (李育貞) "Cliff's Edge," and "Your Eyes Open."