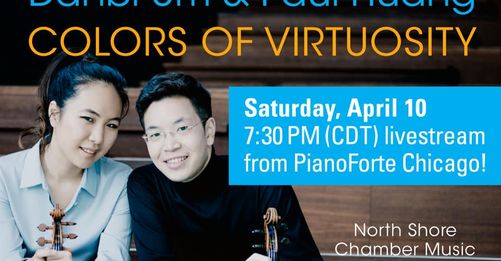 Huang will be performing in recital together with violinist Danbi Um and pianist Amy Yang. He will begin the concert with a violin-piano duet of the Violin Sonata in F major, followed by duo violins performance of Sonata for Two Violins in A minor and Hebraique Elegie for Two Violins. The program will end with a trio recital of the Navarra for 2 Violins and Piano, Op. 33.

Born in Taiwan, Huang began violin lessons at the age of 7 and he is primarily a concerto performer with orchestras and at music festivals. He was a recipient of the inaugural Kovner Fellowship at The Juilliard School, where he earned his Bachelor's and Master's degrees under violinist Hyo Kang and Lee I-hao.

Huang is recognized for his intensely expressive music making, distinctive sound and effortless virtuosity. He received the prestigious Avery Fisher Career Grant in 2015 and the Lincoln Center Award for Emerging Artists in 2017. He had been named artist-in-residence for the National Symphony Orchestra of Taiwan’s 2020-21 season.

The Washington Post remarked that Huang 'possesses a big, luscious tone, spot-on intonation and a technique that makes the most punishing string phrases feel as natural as breathing' and further proclaimed him as an artist 'with the goods for a significant career.'

Founded in 2010, North Shore Chamber Music Festival is an annual summer event that provides Chicago's North Shore with musical experiences of the same caliber and quality as those found in Metropolitan Chicago and the great halls of the world, but within a very intimate and welcoming environment.

The performance will livestream on NSCMF official website and violin channel.