Dignified musical dedicated to Cambodian genocide to tour US 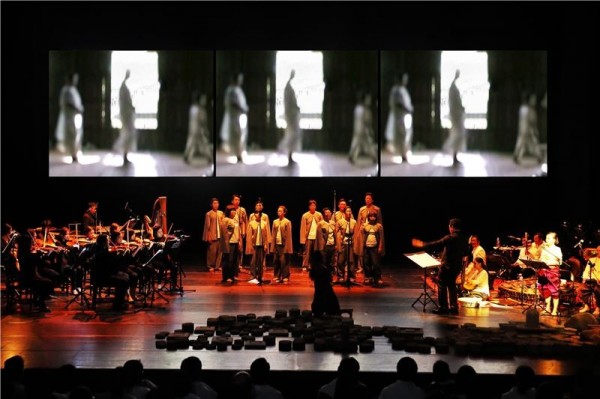 The US premiere of "Bangsokol: A Requiem for Cambodia” - a collaborative, cathartic musical by artists from Australia, Cambodia, Taiwan, and the United States - will be hosted by the Brooklyn Academy of Music (BAM) in New York on Dec. 15.

"Bangsokol” is an hour-long, multinational attempt to return dignity to the dead with a symphonic ritual remembering the Cambodian genocide.

Khmer Rouge brutality killed about 80 percent of Cambodian artists around 1975, but "Bangsokol” returns near-extinct Khmer musical forms to the stage, weaving together ancient harps, flutes, and Buddhist chanting against a cinematic backdrop of historic footage and photographs.

As the musical procession sways with additional sounds provided by the Metropolis Ensemble and the Taipei Philharmonic Chamber Choir, "Bangsokol” seeks to preserve this painful history while espousing peace as the ultimate goal of transitional justice.

The Taipei Philharmonic Chamber Choir studied intensely to overcome the difficulties of the Cambodian and Pali languages, practicing until each choir member could recite and sing the whole musical from memory.

"Bangsokol” producers include composer Him Sophy and filmmaker Rithy Panh - two survivors of the Khmer Rouge - as well as American writer Trent Walker and Australian stage director Gideon Obarzanek. It was commissioned by Cambodian Living Arts with additional support from the Ministry of Culture's Rainbow Initiative.

The Rainbow Initiative for cross-sector projects was launched in 2013 to encourage more international partnerships, develop and strengthen regional networks, and create new models of cultural collaboration.

Following the performance in New York, "A Requiem for Cambodia: Bangsokol” will be staged this Boston and then Philharmonie de Paris. Tour dates available here.