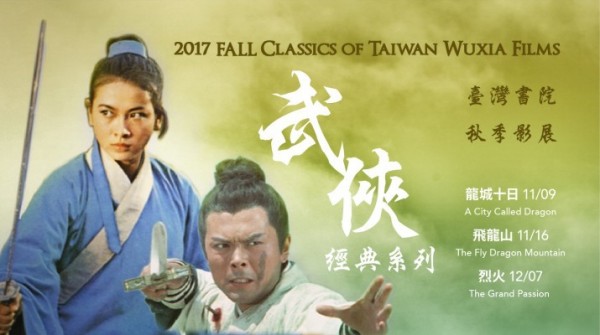 For its "Fall 2017 Taiwan Academy Film Screening” series, the Taipei Cultural Center in New York will harken back to the golden age of Taiwanese wuxia films by showing three classics - each representative of its director's style and aesthetics - from Nov. 9 through Dec. 7.

"A City Called Dragon (龍城十日),” the opening film on Nov. 9, follows heroine Shang Yen-chih (尚炎芝) as a secret agent venturing into the Jin-controlled military base Dragon City as the Southern Song Dynasty falters. She is after a legendary map that holds the key to defeating the Jin invaders.

Actress Hsu Feng (徐楓), still a newcomer at this time, cuts a dashing figure in her period costume under the watchful eye of director Tu Chung-hsun (屠忠訓). Well-choreographed and scripted, the 1970 classic is driven by a suspenseful plot, meticulously selected locations, and breathtaking dramatic tension.

"The Fly Dragon Mountain (飛龍山),” to be screened on Nov. 16, is about a young orphan's quest for vengeance. Er-Hu (二虎) may have grown into a warrior capable of fighting injustice and protecting the weak, but his eagerness to avenge his mother may soon lead him astray.

Director Chen Hung-min (陳洪民) began his career as a film editor. He devoted painstaking care into the design and choreography of every action scene, from the fights and chases to the horse-riding and cart-pulling sequences, creating cinematic moments infused with both sensory and dramatic tension.

"The Grand Passion (烈火),” the closing film on Dec. 7, is a battle of wits as a pair of siblings are tasked with delivering a secret list to the Mount Taihang Zhongyi Society, so two armies can consolidate their forces to retake the Central Plains from the invading Jin.

Director Yang Shih-ching (楊世慶) delivers beautifully in this 1970 tense historical drama, fueled by complex relationships and a vivid narrative full of twists and turns. Despite a short running time of just 85 minutes, the film manages to successfully reconstruct the perilous rebellion against the Jin during the Southern Song dynasty.