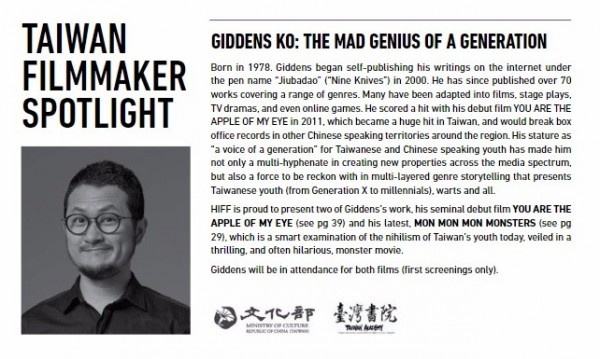 The Spotlight on Taiwan program at the 2017 Hawaii International Film Festival (HIFF) will honor one of the most talented and exciting voices from Taiwan - author-filmmaker Giddens Ko (九把刀).

Ko, 39, first shot to fame as a prolific internet writer who published a daily average of 5,000 words on horror, science fiction, and romance under the handle Jiubadao ("Nine Knives”). His film debut, the 2011 romance blockbuster "You Are the Apple of My Eye (那些年，我們一起追的女孩),” led to an extended foray into cinema that has since produced four book-to-film adaptions.

Ko's latest production, "mon mon mon Monsters! (報告老師！怪怪怪怪物！),” is a dark comedy on campus bullying that questions who are the real monsters among high-schoolers and flesh-eating ghouls. It has been touted as "a savagely funny social horror movie” by Variety and scored 80% certified fresh on Rotten Tomatoes.

"mon mon mon Monsters!” as well as "You Are the Apple of My Eye,” a seminal coming-of-age Taiwanese story that took Asia by storm in 2011, will both be screened on Nov. 9. The director will be in attendance for both films.

"100th Birthday Wish (小孩不在家)” on a grandma's secret yearning for suicide will be shown as part of HIFF37's (Dis)Connection Shorts as well.

Spotlight on Taiwan is an annual HIFF program supported by the Taiwan Academy in Los Angeles. Check out last year's program here.