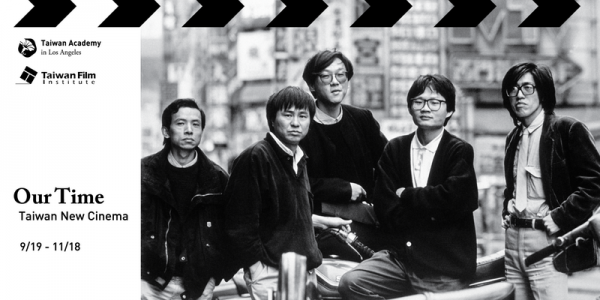 When martial law was lifted in Taiwan in 1987, an unprecedented era of creativity and self-expression followed. The Taiwan Academy in Los Angeles will examine how this phenomena blossomed within the realm of cinematography through a special exhibition from Sept. 19 through Nov. 18.

Upon the conclusion of the 38-year rule of martial law, a new generation of Taiwan filmmakers set out to shatter the Hollywood-esque, commercialized take on moviemaking, tossing aside the heavy burdens attached to traditional expectations in favor of personal, innovative films drawn from everyday life in Taiwan.

This became the world-renowned Taiwan New Wave Cinema movement, and at its helm were none other than Edward Yang, Hou Hsiao-hsien, Wu Nien-jen, Tsai Ming-liang, and Mark Lee Ping-bing.

"Our Time: Taiwan New Cinema” hopes to share the unique style of storytelling and filmmaking of Taiwanese cinema through the careers and influence of these five foundational filmmakers. The selection of films and materials were chosen for their profound simplicity and depth found in the freedom away from imposed ideologies.

The Taiwan Academy exhibition will be held concurrently alongside the first-ever Taiwanese Film Biennial in Los Angeles. "What Time Is It There?” spearheaded by the UCLA Film and Television Archive picks up where "Our Time” concludes by showcasing a new generation of silver-screen torchbearers active today in Taiwan.

Curated by Robert Chi and Paul Malcolm, "What Time Is It There?” will show ten films starting Oct. 20 at UCLA's Billy Wilder Theater. Cinemagoers will be greeted with a well-rounded selection of both familiar and new faces, including Chung Mong-hong ("Godspeed”), Midi Z ("City of Jade”), and Chen Yu-hsun ("The Village of No Return”).

‘What Time Is It There? Taiwanese Film Biennial'