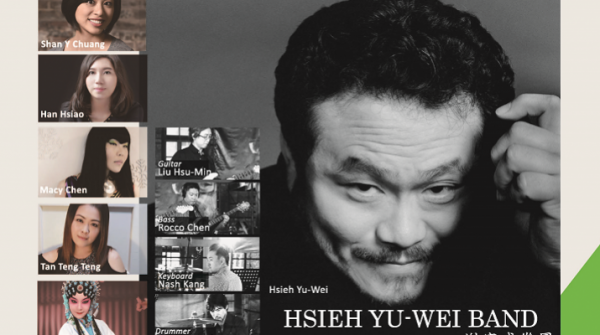 Using the decade as unit, curator Hsieh Yu-wei (謝宇威) has envisioned a night of music that would start with the indigenous ballads from the turn of the 20th century to Hokkien tunes, Hakka songs, and traditional Chinese theater arrangements.

Life in 1940s Taiwan will be represented by works from iconic composer Teng Yu-hsien (鄧雨賢), the 1950s by household folk songs, 1960s by American-inspired local rock, 1970s by rom-com movie themes, 1980s by Cantonese drama tracks, and 1990s by Taiwan's own Mandopop.

In addition, protest music banned under martial law, translated music, and so-called "campus folk songs” - student-led creations that were often fueled by social movements - will also be woven into the tapestry of a hundred years of Taiwanese music.

Close to fifty songs will be performed among the two New York concerts, in which the curatorial aim was not only to revive and give voice to once-banned songs, but also to share and demonstrate the sheer diversity of Taiwan by showcasing a medley of music.

The harmonious-themed program will take place on Sept. 6 at the Martin E. Segal Theatre, and on Sept. 8 at Flushing Town Hall. Performances will be led by Hsieh Yu-wei Band and other Taiwanese-American artists based in the larger New York region.

"Enchanted Formosa: An Evening of Music from Taiwan” is part of the 30th anniversary of the lifting of martial law program organized by the Taipei Cultural Center in New York.

‘Enchanted Formosa: An Evening of Music from Taiwan'