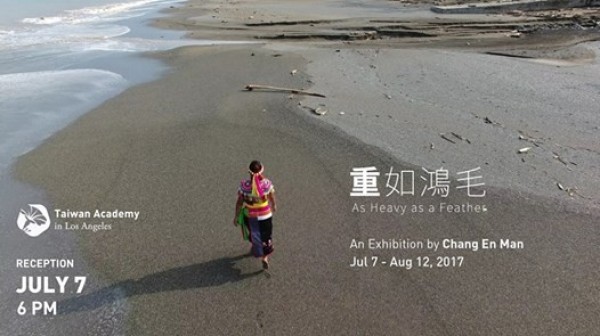 "As Heavy as a Feather,” a video and mixed installation exhibition featuring aboriginal culture and land by Chang En-man (張恩滿), will be on view at the Taiwan Academy in Los Angeles from July 7 through Aug. 26.

Chang is part of a younger generation of aboriginal people who had grown up, lived, and worked in Taipei instead of their rural hometowns. The Paiwan artist began searching for her own identity later on through visiting and exploring aboriginal tribes along the eastern coast.

Her exhibition in Los Angeles will feature the cultural landscapes of the aborigines in Taiwan, Canada, and the United States in three sections. The first section will highlight a large octagonal kite made in traditional Paiwan fashion that projects the unique aboriginal territories in Taiwan and Canada.

The next section will take the audiences to the Fudafudak community on the east coast of Taitung. The featured imagery will present social issues such as the loss of aboriginal culture and territory as well as their struggles to balance economic revitalization with environmental protection.

The last section will present a video featuring Chang and Taiwanese indigenous people singing the legendary Ngayaw song while making a kite together.

An editorial station will be installed at the end of the exhibition for audiences to ask questions or provide feedback on the issues raised by "As Heavy as a Feather” to continue the dialogue and discussion.

In addition, Chang will hold an artist talk on July 7 with Tomo Sugimoto, a doctoral candidate in Anthropology of Stanford University who is researching on the aboriginal peoples in Taiwan.

The next forum, which will be held on July 15, will invite Scott Ezell, author of "A Far Corner: Life and Art with the Open Circle Tribe,” to share his visit to Taiwan's indigenous tribes and perform the music piece he created in Dulan.

"As Heavy as a Feather” was on display at Centre A in Vancouver last year to showcase Chang's journey of visiting the First Nations people in Canada. The exhibition was then presented in Taiwan earlier this year at the Taichung- based National Taiwan Museum of Fine Arts.

To enhance exchanges between the indigenous peoples of Taiwan and the United States, the short film "We Are in Crisis” will be added to the third section commemorate the indigenous movement against the Dakota Pipeline.

"A Seat at the Drum,” a documentary by indigenous journalist Mark Anthony Rolo, will also be screened in the third section to show the struggles of indigenous families resettling from Indian reservations to Los Angeles.

More information on the Paiwan artist can be found here.