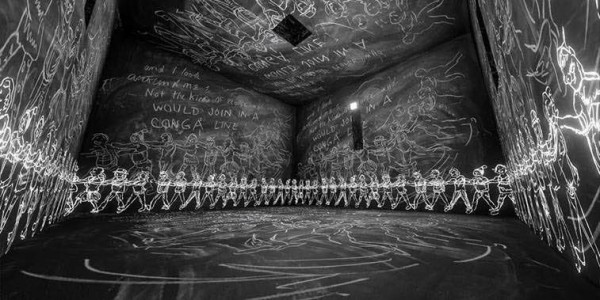 An exhibition featuring interdisciplinary collaboration between Taiwanese artist Huang Hsin-chien (黃心健) and American multimedia pioneer Laurie Anderson will make its debut on May 28 at the Massachusetts Museum of Contemporary Art (MASS MoCA).

For his ability to integrate digital technology with traditional art forms to create works of impressive depth, he was selected as a recipient of the Ministry of Culture's Rainbow Initiative for collaborative cultural projects. The grant brought Huang together with Anderson to create a series of unforgettable works for the Massachusetts Museum of Contemporary Art.

Anderson, one of the museum's first artists-in-residence, is a groundbreaking leader in the use of technology in the arts with an oeuvre encompassing books, albums, and performances that incorporate film, live music, and spoken word. She has also developed new musical instruments, including the tape bow violin, in which the bow has been replaced with magnetic audiotape and the bridge with a reader.

Anderson first worked with Huang in 1995, in which they developed an interactive CD-ROM titled "Puppet Motel.” "Her creation has been like a sharp blade pointing to my heart; but instead of piercing me, it leads me all the time,” Huang noted of the collaboration that created over 30 virtual rooms each with unique music and plotlines.

For the upcoming Massachusetts exhibition, Huang and Anderson created a vast environment for exhibitiongoers to experience their envisioned space. Their constellation of galleries and installations will include a working studio, audio archive, exhibition venue, and virtual reality immersion.

For example, the "Chalk World” will bring visitors into a virtual world constructed with infinite chalk boards to symbolize the human memory, whereas "Aloft” is set in a disintegrating airplane cabinet above New York City, floating among debris and faint echoes of stories.