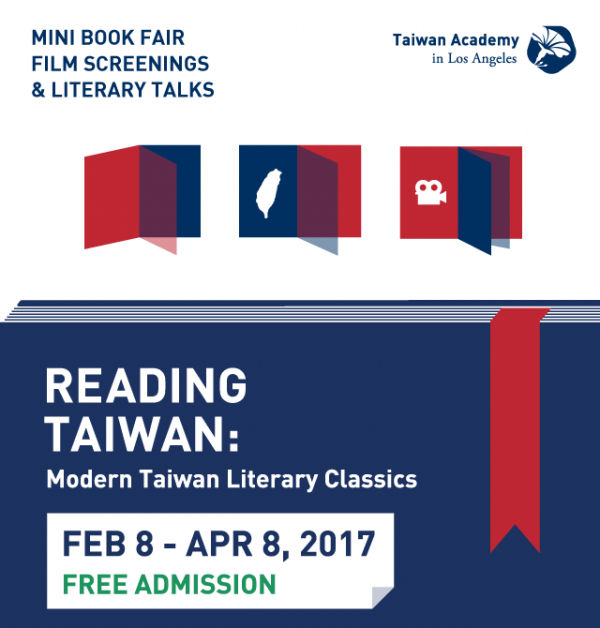 For those who couldn't make it to the 2017 Taipei International Book Exhibition, consider going to this free Taiwan-themed literary event in Los Angeles.

"Reading Taiwan” is organized by the Taiwan Academy in Los Angeles to introduce modern Taiwan literary classics through screenings of literature-adapted films and academic talks from Feb. 8 through April 8.

Short films and documentaries such as "The Coming of Tulku (化城再來人),” which reviews the extraordinary life of late poet Chou Meng-tieh (周夢蝶), will be screened on Tuesdays and Thursdays through April. Each screening day will also offer three slots - 11am, 3pm, and 5pm.

Feature films adapted from published materials, including Hakka epic "Blue Brave: The Legend of Formosa in 1895 (一八九五乙未)” that was based on the writings of novelist Li Chiao (李喬), will be screened on Saturdays from 1pm through 3pm.

On March 4, UCLA's Michael Berry will be joined by professor Dominic Cheung to engage in public dialogue under the theme of "From Exiles to Native Sons: Diaspora and Nativism in Taiwanese Literature.”

On March 16, Berry will give a keynote speech on "Wu He and Remains of Life.” Wu He (舞鶴) is the penname of Chen Kuo-cheng (陳國城), a writer who penned such classics as "Remains of Life (餘生)” detailing the Musha Incident, the 1930 Seediq uprising against Japanese colonial rule.

On March 25, professors Berry, Shih Shu-mei, Liao Ping-hui, and Robert Chi will round up the last of the program's academic talks by introducing different perspectives on Taiwanese literature through a panel called "Through the Looking Glass.”

The Taiwan Academy in LA has also prepared a reading room for visitors to drop by and browse through an extensive collection of Taiwan literature, including translated editions of "Crystal Boys (孽子)” by Pai Hsien-yung (白先勇), "The Man with the Compound Eyes (複眼人)” by Wu Ming-yi (吳明益), and "The Taste of Apples (頻果的滋味)” by Hung Chun-ming (黃春明). The full list is available here.