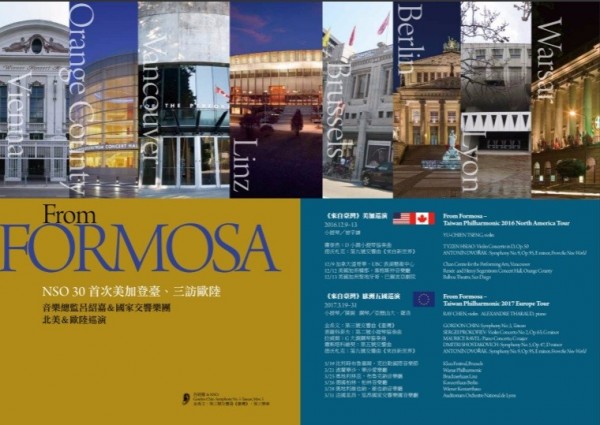 The National Symphony Orchestra (國家交響樂團), better known as Taiwan Philharmonic, will make its US debut at Orange County on Dec. 12.

Based in the National Theater and Concert Hall in Taipei, the 30-year-old symphony ensemble is one of the leading and oldest orchestras in Asia. It is currently led by artistic director Lu Shao-chia (呂紹嘉).

NSO averages around 100 members and works with globally acclaimed musicians of the likes of Lorin Maazel, former conductor of Vienna State Opera; Rudolf Barshai, founder of Moscow Chamber Orchestra and viola virtuoso; and Krzysztof Penderecki, who is touted "Poland's greatest living composer” by The Guardian.

NSO regularly travels to Vienna, Paris, Berlin, Singapore, and Sapporo, and for its US debut on Dec. 12 it will perform works by Tchaikovsky and two leading Taiwanese composers - Lee Chun-wei (李俊緯) and Tyzen Hsiao (蕭泰然).

Lee was the winner of the 2013 Luxembourg Sinfonietta International Composition Prize whereas Hsiao is known internationally as "Taiwan's Rachmanioff.”

Taiwan Philharmonic will also make its Canadian debut on Nov. 9 at Chan Centre for the Performing Arts in Vancouver.

Presented by the Egret Music Centre, Taiwanese Canadian Cultural Society, and the UBC School of Music

Supported by the Taiwan Academy and Ministry of Culture 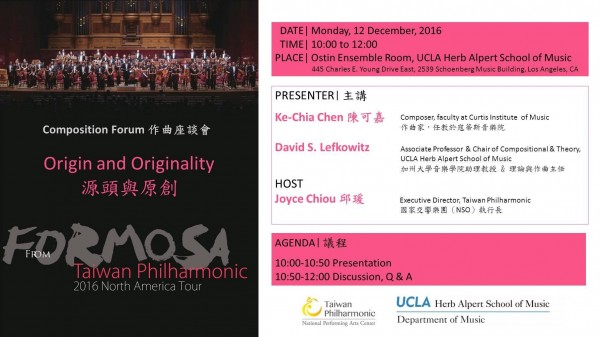