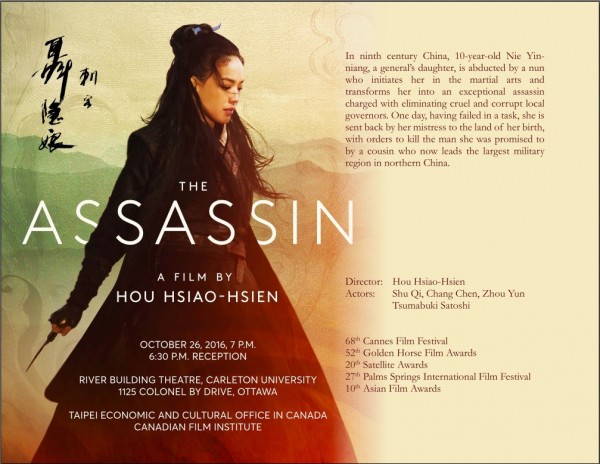 In collaboration with the Taipei Economic and Cultural Office in Ottawa, the Canadian Film Institute will present two impressive examples of contemporary Taiwan cinema - "The Assassin (刺客聶影娘)” and "KANO.”

"The Assassin” is a sumptuous martial arts epic for which world-renowned filmmaker Hou Hsiao-hsien (侯孝賢) was named Best Director by the 2015 Cannes Film Festival.

Touted as "a catalog of visual beauty and formal innovation” and "pure catnip” for cinephiles by The New York Times, the film takes place in ninth-century China during the height of the imperial Tang Dynasty. A deadly assassin lurks in the shadows, watching her childhood betrothed as she wavers between affection and professionalism.

Hou professed that his love for martial arts novels and Tang Dynasty legends became the foundation of "The Assassin.” During production, he stressed the need for realistic fight scenes, in which fighters "follow the rules of gravity” instead of flying through the air.

The impeccable portrayal of humanity and the classic atmosphere of the Tang Dynasty are augmented by the film's unique dialogue, which is sparse and spoken in antiquated Chinese to reflect the director's vision of that time period.

No less impressive is the Taiwanese baseball movie "KANO” produced by filmmaker Wei Te-sheng (魏德聖), who was also the mastermind behind such blockbusters as "Cape No. 7 (海角七號)” and "Seediq Bale (賽德克·巴萊).”

Set in 1931 when Taiwan was a Japanese colony, 'Kano' — an abbreviation for the Chiayi Agriculture and Forestry Public School — tells the true story of the high school's baseball team that traveled to Japan that summer to play in the Koshien tournament, a renowned high school baseball contest.

The 2014 movie, which depicts how a markedly average high school baseball team in Chiayi managed to effect a turnaround under the instruction of a relentless coach, is the 6th highest grossing domestic Taiwanese film of all time.