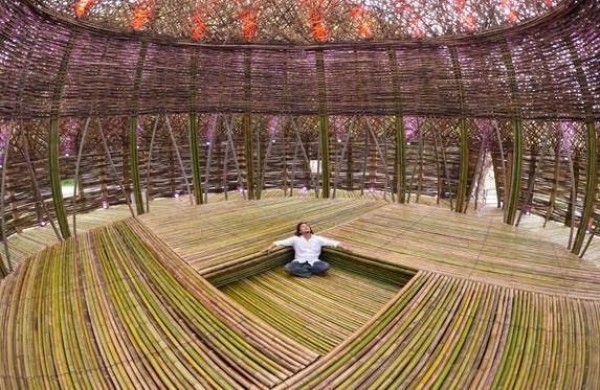 Two documentaries by up-and-coming Taiwanese director Singing Chen (陳芯宜) are slated for debut at the New York Public Library for the Performing Arts on Oct. 20 and 22.

"Mountain Spirits (山靈)” traces the artistic journey of Wang Wen-chih (王文志), an acclaimed artisan who represented Taiwan at the 2001 Venice Biennale. The director follows Wang as he works with natural materials such as bamboo, rattan, and wood, meditating upon his memories of growing up the mountains to create serene installations that are reminiscent of landscape paintings.

"Ears Switched Off and On (如果耳朵有開關)” is devoted to three pioneering sound artists active in Taiwan since the 90s - Dino Liao (廖銘和), Wang Fu-jui (王福瑞), and Lin Chi-wei (林其蔚). This documentation of experimental music and Taiwan's second new wave of sound is representative of Chen's highly stylized approach towards film.

Chen is an award-winning screenwriter and director whose works focus on the human side of arts and culture. Her ability to depict the most subtle of details has earned her several accolades, including the awards for Best Narrative Feature and Most Promising Director for "Bundled (我叫阿銘啦)” at the 2001 Taipei Film Festival.

She is also known for "Who Is Fishing (誰來釣魚),” which captures the territorial and sovereignty issues over the Diaoyu Islands from a human angle instead of a nation's perspective; "God Man Dog (流浪神狗人),” which presents religion, destitution, and hypocrisy as social blind spots; and "The Walkers (行者),” a documentary on Taiwan's premier arts group Legend Lin Dance Theatre.

The director will join audience members for post-screening Q&A sessions on both Oct. 20 and 22 at the NYPL's third-floor screening room. The admission-free event offers seating on a first-come, first-served basis.

‘Ears Switched Off and On'