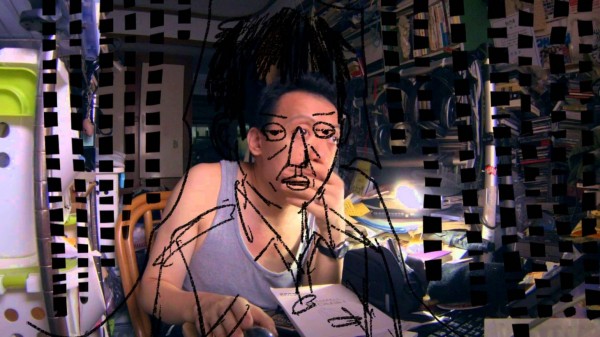 The Asian American International Film Festival (AAIFF) will screen "TPE-Tics (台北抽搐),” a 2015 documentary on one of the most idiosyncratic performers from Taiwan's underground screen, at Village East Cinema on July 29.

"Why do I stand on the stage like this? Because I am a mental disorder of the 20th century,” declares featured musician Huang Da-wang (黃大旺) - a noise performer, a music aficionado, and a member of music label Kandala Records.

Huang, who is also known as Black Wolf or Yinfan, is widely considered a pillar of Taiwan's underground music scene. Nevertheless, he denies categorization as an artist, and refuses to define what art is.

"TPE-Tics” is an intimate look into Huang's co-existence with Tourette's syndrome and his way of life, which is incredibly different from the norm and largely incompatible with society. As links between Huang's past trauma and present creations are revealed, his psychological anxiety is at once enlightening and heartbreaking.

Despite his bouts of depression, Huang's humor and witty introspection relieves the melancholy. More than merely music, the film examines human experiences and nuanced values that are precious yet rarely accessible.

Huang performed in Governors Island off Manhattan last year as part of the 2015 New York Electronic Arts Festival. His "Blackwolf Nagashi” was a live performance featuring Huang and his unique definition of karaoke. By using pre-recorded audio broadcasted by the lead singer, the live band served a different purpose on stage.

In addition to "TPE-Tics,” the 2016 AAIFF will also screen two other Taiwanese films - the New York premiere of "Midnight Dance (深夜海產店),” a drama following a night in the life of a young beer promotion girl, and "Cronos (克洛諾斯),” a thriller recording the descent into paranoia of an older man who suspects his girlfriend and his son are having an affair.