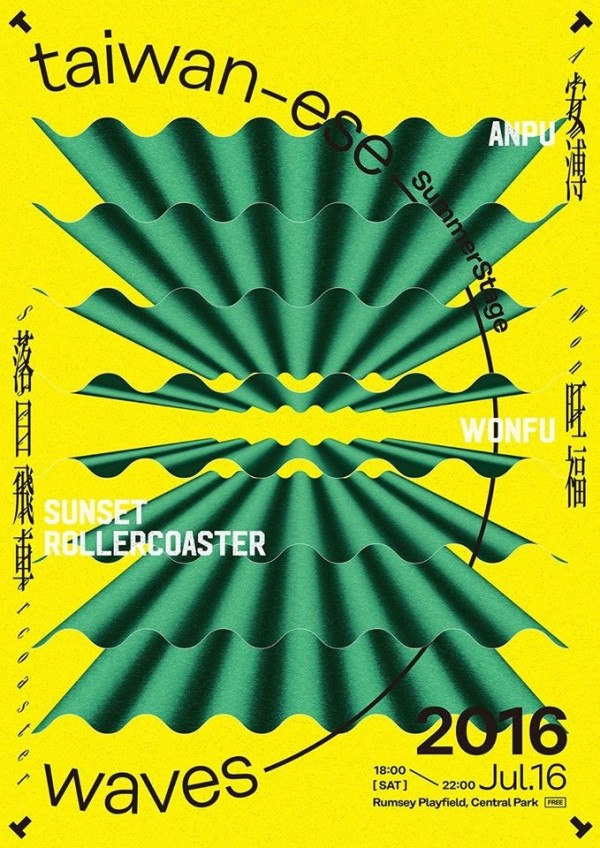 Anpu previously went by the stage name Deserts Chang (張懸) to avoid riding upon the success of her politician father, Chiao Jen-ho (焦仁和), former secretary-general of the Straits Exchange Foundation (海基會). She released her fourth studio album under her birth name in 2012 to signify a change in musical direction.

Wonfu is one of the most successful indie bands hailing out of Taiwan's underground scene. Combining folk culture with Taiwanese humor, the four-person collective rocks out to Motown, ‘60s rock, improvised comedy, and indie pop. Their bright ‘80s-style outwear - neon tights, colorful prints, block-colored shorts - are a throwback to their playful roots.

Sunset Rollercoaster is a five-man ensemble that serenades to the fantasy of love and intoxicating experiences. Its use of absurdist lyrics and musical elements from soul, garage, and psychedelic rock has made the young band an icon of urban Taipei pop.

Anpu, Wonfu, and Sunset Rollercoaster will perform in a four-hour segment called "Taiwanese Waves” at Rumsey Playfield in Central Park as part of 2016 SummerStage, a month-long series of open-air concerts organized by the City Parks Foundation. Door opens at 5pm to the admission-free event. Find out more at www.cityparksfoundation.org.