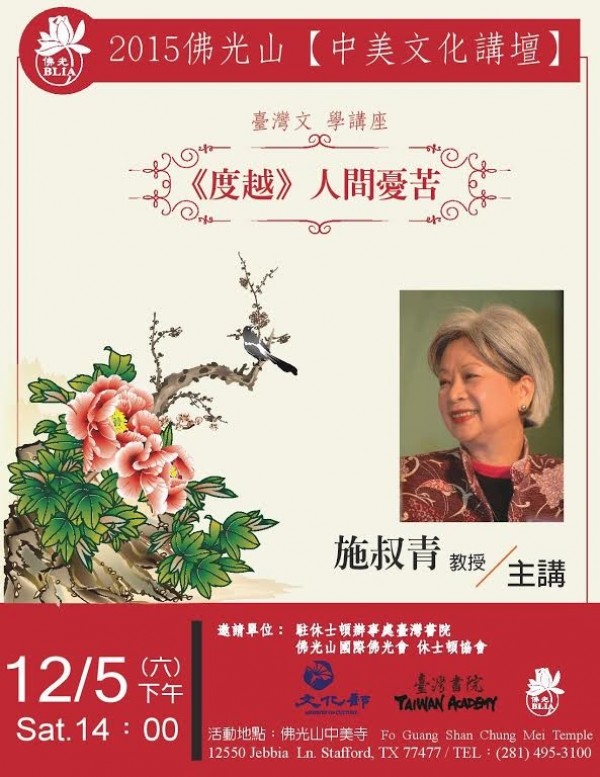 After her last public visit to Texas in 2012, award-winning writer Shih Shu-ching (施叔青) will return to Houston in early December with her latest draft of a Buddhist-themed novel.

Shih, 70, has dedicated her whole life to writing. In her five-decade-long career, which began with her first novel "Gecko (壁虎)” at the age of 17, she has garnered accolades such as the 12th National Award for Arts in 2008 for the literature category.

Her first stop will be at the Chao Center for Asian Studies at Rice University on Dec. 3, where she will give a talk entitled "The Search for Identity through Female Eyes.” From the vantage of Shih's Hong Kong trilogy ("City of the Queen”) and Taiwan trilogy (no English edition yet available), the audience will be asked to explore their shared history and the search for identity during an era of turbulence from a female perspective.

The second speech entitled "Transcending Human Sufferings” will be held at Fo Guang Shan Chung Mei Buddhist Temple on Dec. 5. In recent years, Shih has turned her interest toward the study of Buddhism. Consequently, the audience will be guided to search and to re-orient oneself through her new novel written from a Buddhist viewpoint within the modern society structure.

The two events are jointly organized by the Taiwan Academy of the Taipei Economic and Cultural Office in Houston, Chao Center for Asian Studies at Rice University, and Fo Guang Shan Chung Mei Buddhist Temple.

Shih's younger sister, who goes by the pen name Li Ang (李昂), is also an accomplished writer based in Taiwan.

‘The Search for Identity through Female Eyes'