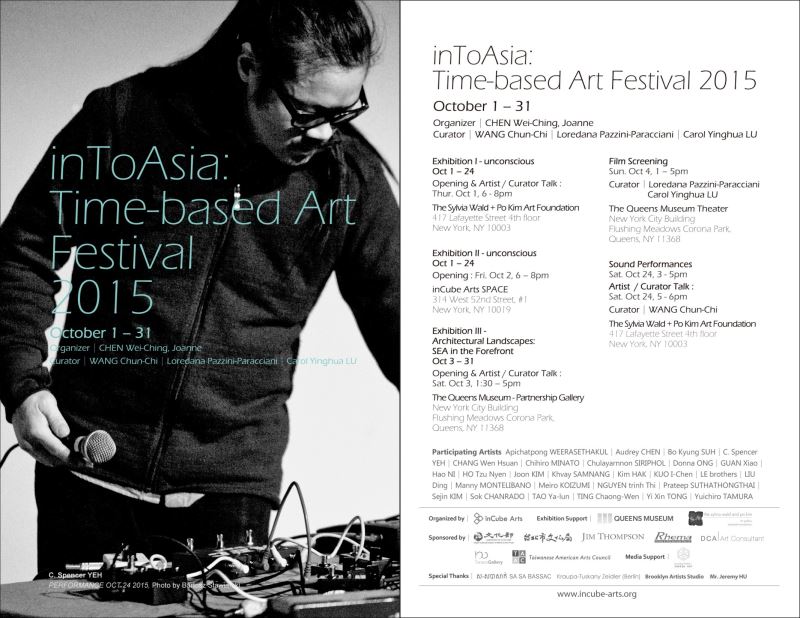 This coming October will see a total of 27 artists from Taiwan, Cambodia, China, Indonesia, Japan, Singapore, South Korea, Thailand, and Vietnam present their works through exhibitions, sound performances, film screenings, and keynote speeches at the second edition of inToAsia.

The art festival is split into three curatorial segments - "Retina of the Unconscious” curated by Wang Chun-chi (王俊琪) of Taiwan, "Cause Commune” by Carol Lu of China, and "Architectural Landscapes: SEA in the Forefront” by Loredana Pazzini-Paracciani of Italy.

Two more artists from Taiwan - Nana Chen and Spencer Yeh - will be part of the film collective "Cause Commune,” inspired by the same-titled journal published between 1972 and 1974 by French cultural theorist Paul Virilio, socialist Jean Duvignaud, and writer George Perec.

Slated for Oct. 1 through 31, inToAsia: Time-Based Art Festival is organized by the nonprofit inCube Arts in New York City; co-hosted by the Queens Museum of Art and The Sylvia Wald and Po Kim Art Gallery; and supported by the Ministry of Culture of the Republic of China (Taiwan).

Retina of the Unconscious

Architectural Landscapes: SEA in the Forefront

Cause Commune (Common Cause)