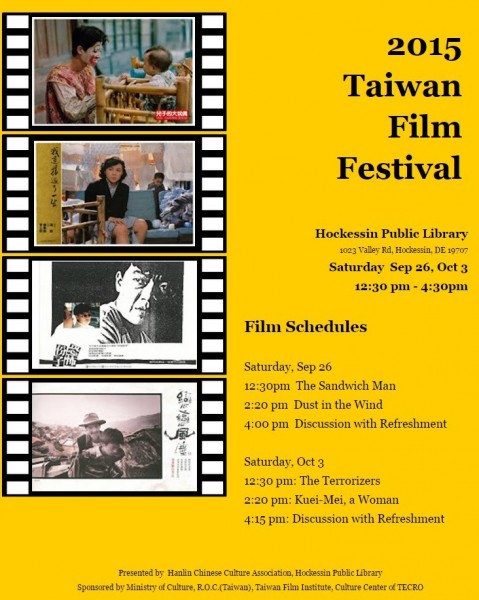 Four classic films representative of Taiwan's socioeconomic psyche during the 1980s will be shown at the Hockessin Public Library in Delaware on Sept. 26 and Oct. 3.

In the early 1980s, movies portraying realistic tales of life in Taiwan began to surface. These productions became known as New Taiwanese Cinema, standing in contrast to the melodramas or kung-fu action films made in the decades before.

These films examined many important issues facing Taiwanese society at that time, including urbanization, the struggles of poverty, and conflict with political authority. This emphasis on realism is comparable to the Neorealism movement of post-World War II Italy.

Adapted from works by famed novelist Huang Chun-ming (黃春明), "The Sandwich Man” is rich in humanistic concern and realistic depictions of the land. The downbeat characters reflect and examine Taiwan's progress and the aftermath of modernization, industrialization, and urbanization in the early 1980s.

"Dust in the Wind,” based on the childhood romance of scriptwriter Wu Nien-jen (吳念真), follows an inevitable separation of two young lovers due to the social and economic divide between the countryside and city.

"The Terrorizers,” arguably Yang's most violent film, reflects the director's vision of a Taipei seduced by money and diseased by globalization. In this crassly materialistic city, the lives of complete strangers and their facades are shattered by a prank call.

In the allegorical "Kuei-Mei, a Woman,” the protagonist represents both the "motherland” of mainland China and the fertility of Taiwan. The success of children, families, and nations are built upon the sacrifices of the mother, and Kuei Mei's withering health mirrors the environmental toil of industrialization.

Co-organized by the Hanlin Chinese Culture Association and the Hockessin Public Library, "2015 Taiwan Film Festival: New Taiwanese Cinema in the 1980s” is made possible with support from the Taiwan Film Institute and the Taipei Cultural Center in New York.