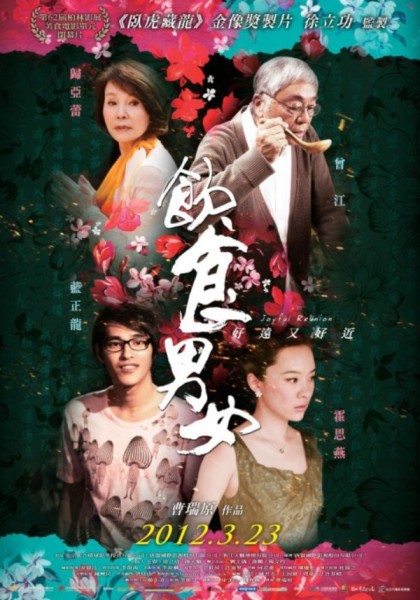 The Taiwan Academy will host a culinary-themed afternoon on Sept. 19. Food lovers are invited to enjoy a special film screening and sample some delectable vegetarian treats.

"Joyful Reunion (飲食男女─好遠又好近)” is the 2012 remake of Lee Ang's (李安) classic "Eat Drink Man Woman (飲食男女).” Both films are laced with a Confucian approach toward life, and uses the theme of good food to discuss generational differences in relationship goals.

The film uses vegetarian food to elude to chaste love, and the lush cinematography may very well entice meat eaters to sample some traditional Chinese vegan dishes such as lotus soup (蓮花盅), named for the dry blossom that unfolds at the serving table; sweet tofu made with peanut milk (花生豆腐); and spicy cucumber slices dressed with stripes of mung bean jelly (小黃瓜涼粉).

The screening will be followed by a discussion led by food writer Theresa Lin (林慧懿), As the protégé and daughter-in-law of Fu Pei-mei (傅培梅), the "Julia Child of Taiwan,” Lin was Lee's top stylist for the choice and portrayal of food in "Eat Drink Man Woman,” and catering director in servingover 400 people during the production of "Life of Pi (少年Pi的奇幻漂流).”

Vegetarian treats will also be served after the screening; sign up for the free event at info@taiwanacademyla.org.