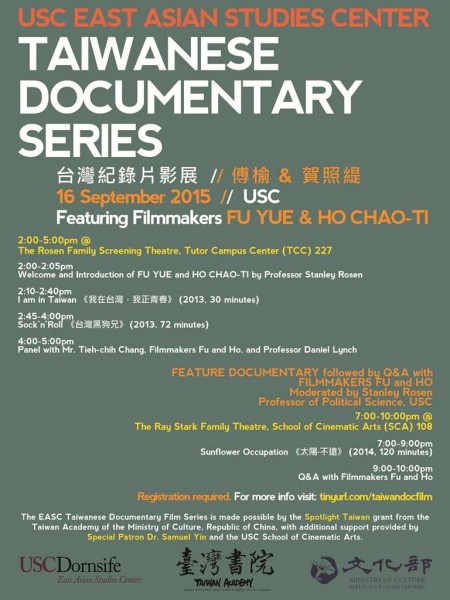 The University of Southern California (USC) will hold a film screening on Sept. 16, featuring documentary series on events, issues, and stories that take place in Taiwan.

The documentary series encompass 3 films made by Fu Yue (傅榆) and Ho Chao-ti (賀照緹). It will begin with an introduction of the two filmmakers and then the screening of 3 films - "I am in Taiwan (我在台灣．我正青春),” "Sock'n'Roll (台灣黑狗兄),” and "Sunflower Occupation (太陽．不遠).”

"I am in Taiwan (我在台灣．我正青春)” is a 2013 short film made by Fu. It documents the story of Tsai Bo-yi (蔡博藝), a Chinese undergraduate student who had studied in Taiwan for 4 years. As one of the first wave of mainland Chinese students permitted to study in Taiwan, Tsai wrote an article titled "I am in Taiwan,” depicting the difference between China and Taiwan from her perspective. The article became online sensation and made her same-titled book a hit.

Ho's "Sock'n'Roll (台灣黑狗兄)” depicts how a local factory tackled the challenges of globalization. The story revolves around a family who makes a living from manufacturing socks. With orders being cancelled because of global competitors, the 45-year-old factory owner had to break through many barriers and revive the dwindling industry.

"Sunflower Occupation (太陽．不遠),” directed by multiple filmmakers including Fu, is a documentary that offers glimpses of the SunflowerMovement in Taipei. Protesting against the passing of the Cross-Strait Service Trade Agreement which they viewed as being done under the table, a coalition of students and civic groups camped outside the Legislative Yuan for 24 days in 2014. The film explores the idea of democracy, politics, and the future of Taiwan.

Additional panels and Q&A with filmmakers will take place in between the films and at the end of the screenings. Registration is required. Please visit tinyurl.com/taiwandocfilm for more information.