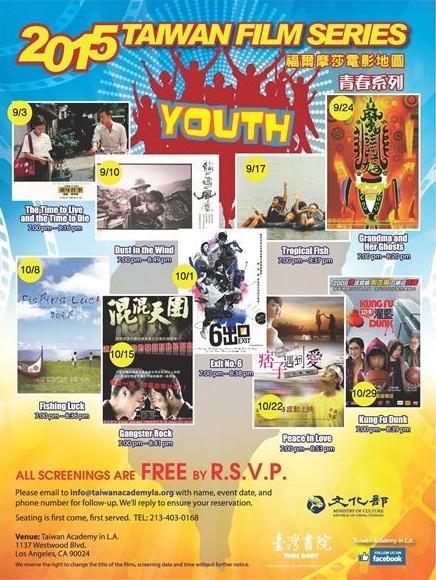 The Taiwan Academy in Los Angeles will kick off in September with a film series reliving the bittersweet memories of youth every Thursday from Sept. 3 through Oct. 29.

The series will start by revisiting two classic films by Cannes-winning director Hou Hsiao-hsien (侯孝賢). "The Time to Live and the Time to Die (童年往事)” scheduled for Sept. 3 is a spare and eloquent family saga while "Dust in the Wind (戀戀風塵)” on Sept. 10 is a coming-of-age story against the backdrop of a disheartened mining town.

"Tropical Fish (熱帶魚)” on Sept. 17 is another representative film of the New Taiwan Cinema movement in the 1990s. The debut film by director Chen Yu-hsun (陳玉勳) offers a poignant look at the rigid Taiwanese social structure and national examination system through a child-kidnapping gone wrong.

"Grandma and Her Ghosts,” an animation in which an elderly spirit medium introduces her grandson to a wide array of Taiwanese ghosts, will screen on Sept. 24. It will be followed by "Exit No. 6 (六號出口),” a humorous mystery bent on solving an unexplainable string of female student disappearances in bustling Ximending, Oct. 1.

Next up are "Fishing Luck (等待飛魚)” on Oct. 8, a simple romance waiting to blossom on the picturesque Orchid Island, and "Gangster Rock (混混天團)” delineating the transformative quality of rock music on street thugs on Oct. 15.

Rounding up the series are: "Peace in Love (愛在墾丁─痞子遇到愛)” on Oct. 22, a refreshing Taiwanese flick featuring a young cast of actors and newcomers from both sides of the Taiwan Strait, and "Kungfu Dunk (功夫灌籃)” on Oct. 29, a Jay Chou production extolling the use of martial arts on the basketball court.