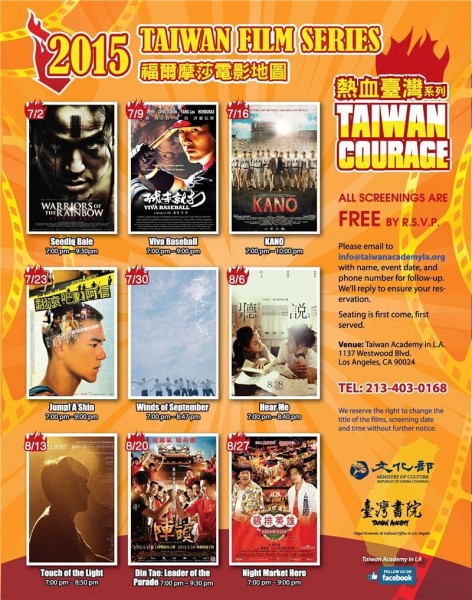 Nine films depicting the fearless aspects of Taiwan's culture will be showcased in an admission-free screening series held at the Taiwan Academy in Los Angeles from July 2 through Aug. 27, 2015.

"Seediq Bale” delineates the proud warrior culture of the aboriginal Seediq tribe and its courageous uprising against Japanese colonial authorities, while "Viva Baseball” and "KANO” tell of a different battle - that of conquering the baseball stadium.

Up next is the courage of growing up and embracing the imperfections of adulthood, which is mirrored in the journeys undertook by the main gymnast character in "Jump! A Shin” and the high school gang leader in "Winds of September.”

The bravery required to take the next step forward, whether it is romance between two seemingly hearing-impaired individuals in "Hear Me” or friendship between a blind pianist and an aspiring dancer in "Touch of the Light,” is another type of courage worth celebrating.

Rounding up the list are "Din Tao” and "Night Market Hero,” both of which represent the fearless attitude held by the ordinary people of Taiwan when faced with adversity.

One film will be shown per Thursday at the Taiwan Academy in Westwood from July 2 to Aug. 27, and each screening will be accompanied by a discussion session hosted by university professors such as UCLA's Robert Chi and USC's Brian Bernards and Chinese-American film directors such as Lin Weiko (林偉克).