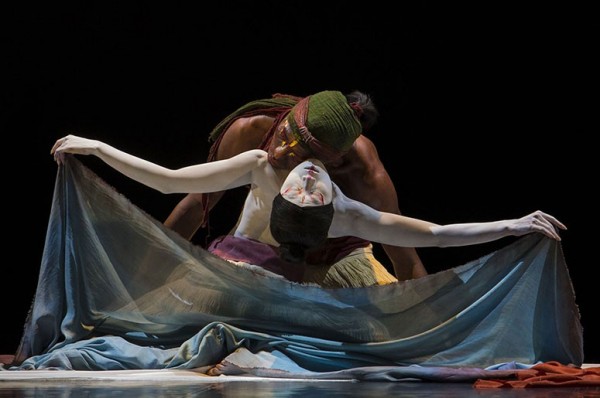 One of Taiwan’s most acclaimed choreographers, Lin Lee-chen (林麗珍), is embarking on a three-city tour in North America from Jan. 20 through Feb. 3. This will mark the first public performance by her dance troupe in Canada.

Lin first captured global attention as an individual artist for her original dance vocabulary that combined eastern refinement and incredible choreography with brilliant visual language. She founded Legend Lin Dance Theatre (無垢舞蹈劇場) in 1995 to present grander performances that could not only better reflect the Taiwanese spirit, but also pay tribute to the timeless rhythm of nature.

Lin and her dancers brought Taiwanese dance to the international scene, including the stages of France, Germany, Italy, Mexico, Spain, and the U.S. Their ritual-like choreography have garnered praise such as giving “new meaning to the concept of ‘poetry in motion’” at the 2014 Venice International Performance Art Week.

Not “even the best seamstress could not cut a thread [from Lin’s work],” added Spanish-language newspaper Canarias 7.

As part of her ongoing search for the cultural beauty and spirit embodied in ancient religious performances and the environment, Lin found a new muse in the ocean – specifically the cyclical nature of tides.

Legend Lin’s latest production – “The Eternal Tides” – is a sumptuous, profoundly moving exploration of the never-ending and interdependent cycles of water and life. It is an informal continuation of the 2009 production “Song of Pensive Beholding,” which is the closing episode of the troupe’s famous “Heaven, Earth, and Man” trilogy and tells of the legend of Brother Eagle and White Bird.

Legend Lin will present “The Eternal Tides” at Ottawa on Jan. 20, Montreal from Jan. 24 to 27, and Vancouver on Feb. 3. Visitors will not be disappointed by the starkly beautiful take on life as dancers mimic water flowing from clouds to rivers and seas.

Legend Lin will also hold a post-screening forum on Jan. 30 after the screening of “The Walkers” – a documentary telling the dance troupe’s story – at the University of Toronto’s Innis Town Hall Theatre.