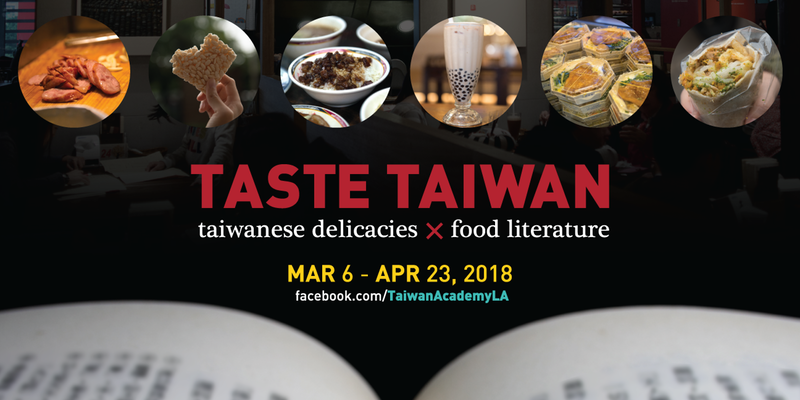 Shortly after the celebration of Lunar New Year, Taiwan Academy in Los Angeles will welcome the year with a meticulously designed exhibit titled “Taste Taiwan: Taiwanese Delicacies and Food Literature.” The exhibit will be open to the public between March 6 and April 23 at Taiwan Academy’s gallery located in Westwood, Los Angeles.

During the exhibit, several interspersed public events will take place in the gallery, featuring food writers, TV personalities and radio host, and scholars, to explore the nostalgia and cultural significance of Taiwanese delicacies, as well as to taste the food while enjoying the literary discussions surrounding the intricacies of Taiwanese food culture.

Each variety will be presented by three prominent writers who turns letters into mouth-watering morsels: Jiao Tong (焦桐), Han Liang-lu (韓良露), and Han Liang-yi (韓良憶). Short video excerpts and photographs of these famous food writers are strewn throughout the gallery, with food models of these delicacies presented in sculptural forms. Audiences will be immersed in the experience with atmospheric sounds.

In order to guide the audience to greater understanding of the unique influence of food on literature in Taiwan, the Taiwan Academy will host three public dialogues by inviting experts, scholars, and writers of culinary and literary realms to share the insightful about food and writing in Taiwan.

Speakers will include: Jiao, known as the “Godfather” of food literature in Taiwan; Theresa Lin (林慧懿), a chef, an author and a television personality; Anna Lee (李宛蓉), a film production food stylist; Professor Pin-hui Liao (廖炳惠) of University of California, San Diego; and Professor Michael Berry and Professor Robert Chi, both of Asian Languages & Cultures of University of California, Los Angeles.

Set on not only quenching the thirst of knowledge, Taiwan Academy is also set on curbing the hunger of its audience. As an extension of the event, Taiwan Academy has partnered with Lollicup Fresh, with special promotional pricing available after visiting the gallery, such as US$1 Milk Tea and 50% off Railroad Bento Boxes.

Each of the literary public dialogues will also be catered, featuring all six of the Taiwanese delicacies in the exhibition for the audience to try a taste of Taiwan, courtesy of NiNi Bakery.

Everyone who loves food and food literature is welcome to inquire more at Taiwan Academy’s Facebook page: https://www.facebook.com/taiwanacademyla/.