Esteemed poet-painter to be featured by University of Maryland 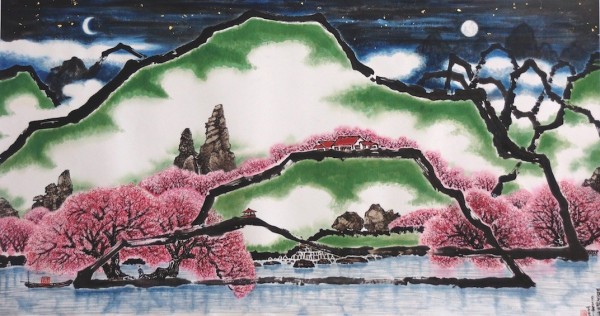 Lo Ch’ing (羅青) – a celebrated painter, poet, and calligrapher who has helped reinvigorate Chinese ink painting for contemporary audiences – will hold his first solo US exhibition in ten years at the University of Maryland, Baltimore County.

Born in Shangdong Province in 1948, Lo moved with his family to Taiwan in 1949. He showed promise as a painter from a young age and began formally studying Chinese ink painting as a young teen. As a graduate of the English Department of Fu Jen Catholic University and holder of an MA in comparative literature from the University of Washington, Lo began his career with a collection of poems, “Ways to Eat a Watermelon,” which won a national poetry award in 1974.

For an artist from Taiwan, where the past century has seen war, occupation, revolution, and an economy that moved from an agrarian base to a globalized market in a matter of decades, the importance Lo places on not dislodging the historical is particularly poignant. The originality of his vision has been featured by Saatchi Art Gallery and the British Museum in London.

His masterful brushwork and gestural nods to past Chinese masters are ever-present, yet his breathtakingly original compositions in bold black ink and bright watercolors also pay homage to pop art, postmodern theories, and the Windows operating system. His love of semiotics is further reflected in the textural reading of visual imagery.

For the upcoming Baltimore exhibition curated by UMD professor Jason Kuo (郭繼生), the selection representing four decades of Lo’s works ranges from his smaller, poetic compositions in the late 1960s to his monumental, post-modern landscapes painted in 2015. The sheer scale of Lo’s canvases offers the viewer the opportunity to hold multiple realities within one contingent moment.

“The Poet’s Brush: Chinese Ink Paintings by Lo Ch’ing” will display 30 artworks that detail Lo’s artistic journey, from the familiar mountain and river landscapes of the genre to an array of modern symbols like airplanes, icons, asphalt, and skyscrapers – Lo’s take on this hallowed pictorial language with his own idiosyncratic vocabulary.