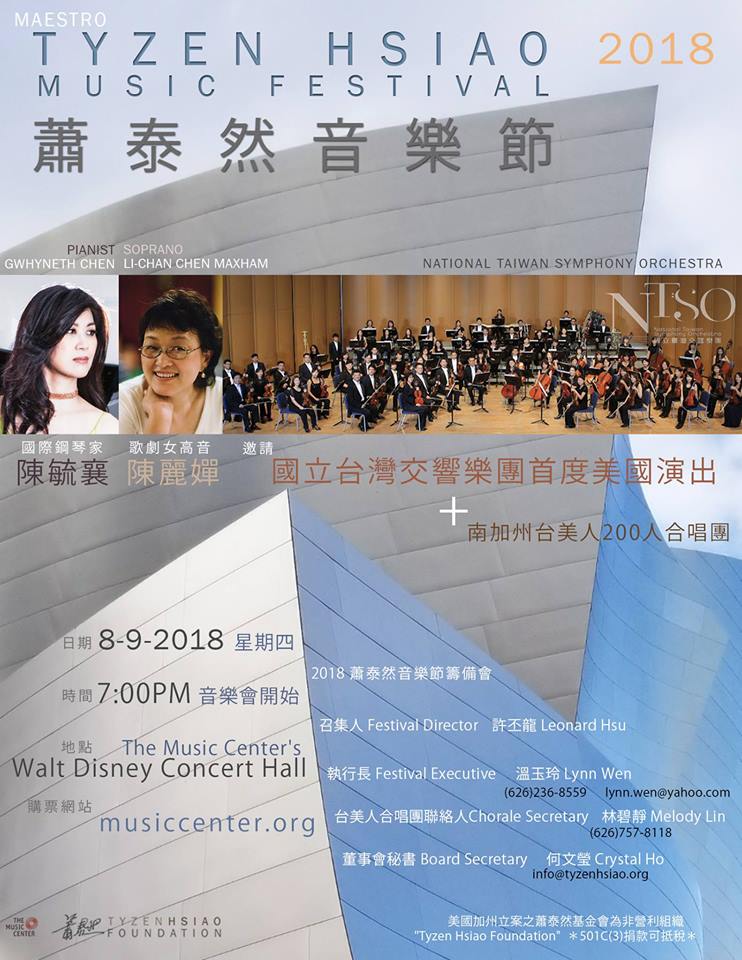 The National Taiwan Symphony Orchestra has been invited to participate in the 2018 Tyzen Hsiao Memorial Concerts in the United States this August. In memory of the eponymous Taiwanese composer, concerts will be held at the Center for the Performing Arts in San Jose on Aug. 4 and the Walt Disney Concert Hall in LA on Aug. 8 and 9. The latter will mark the first Taiwanese orchestra performance at the Walt Disney Concert Hall.

A recipient of both the National Awards of Art and the National Cultural Award, Hsiao created a rich and diverse repertoire of works during his lifetime, from large-scale symphonies, concertos, and chorales to pieces for piano and violin, and even hymns and poems. His was a life dedicated to Taiwanese music, and by the time of his passing in February 2015, his commitment had been recognized with a number of awards.

Hsiao's works have been described as Taiwan's most elegant and moving music, never failing to touch listeners on a deep level. In both Taiwan and the US, where he lived for a number of years, his works continue to be performed frequently. This summer, to commemorate this epitome of Taiwanese composition, Taiwanese artists in the US have organized the 2018 Tyzen Hsiao Memorial Concerts, inviting the NTSO to take part.

"Listening to Taiwan — 2018 National Taiwan Symphony Orchestra Tyzen Hsiao Memorial Concerts" will consist of several of Hsiao's most iconic works, including piano concertos, "The Most Beautiful Flower," "I Love Taiwan," "March of Democracy," "The Angel from Formosa," "Requiem di Formosa (The Beautiful Land)," and "1947 Overture."

The NTSO concerts will also include a performance of Czech composer Dvorak's Symphony No. 9, "From the New World."

The concerts will be conducted by Chen Mei-ann, current musical director for the Chicago Sinfonietta, with performances by Taiwanese-American artists pianist Gwhyneth Chen and vocalist Li-Chan Chen-Maxham. Through the focus on the works of Hsiao, this event aims to let the world hear Taiwan's distinctive voice.

For the choral sections, the organizers have called on the hundred-strong Southern California Taiwanese-American Choir, which comprises some of the best singers in the Taiwanese-American community. This August is sure to be an unmissable celebration of Taiwanese culture in the US.