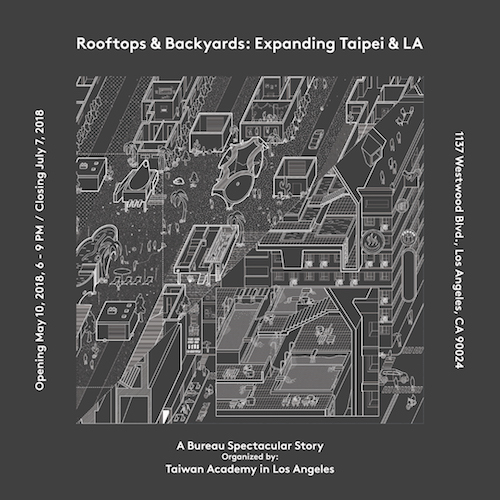 The Taiwan Academy in Los Angeles will present a special exhibition featuring creative urban models, short films, and drawings of Taipei and Los Angeles that explore the issues of limited space in densely populated urban areas, and how the subject is dealt with differently in Taiwan and the United States.

"Rooftops & Backyards: Expanding Taipei & LA" running from May 10 through July 7 will examine the horizontal expansion, or "backyard urbanism," of Los Angeles in juxtaposition with Taipei's vertical expansion, which extends upward as a form of "rooftop urbanism."

For example, many buildings in Taipei have additional "hatted" constructs on rooftops for extra living, storage, or commune space. Whereas Californian backyards often provide additional resources such vegetable gardens and electricity generation that can then be shared with the wider community.

This exhibition is particularly timely and relevant since it applies the universal urban experience as a starting point to delve into topics surrounding art, architecture, urbanism, and the way of life between the cultures of Taipei and Los Angeles.

The opening ceremony on May 10 will include a roundtable discussion featuring Hitoshi Abe, professor of UCLA Department of Architecture and Urban Design; Elizabeth Timme, co-executive director of LA Más; and Ching-yue Roan, professor of Yuan Ze University Arts and Design Department via video conference.

For the 2014 biennale, Lai adopted the idea of a "domestic diagram" as the basis of his architectural concept, highlighting the "parts" and "entirety" of a standard Taiwanese house and analyzing their respective functions for food, rest, and interaction.

Lai will also host a talk with children's fantasy author Henry Lien titled "Imagined Cities: Innovative Uses of Architecture in Film and Literature" on June 2 from 2pm to 4pm.

"From 'Blade Runner' to 'Howl's Moving Castle,' film and literature have historically embraced innovative uses of architecture," said Henry Lien, author of Peasprout Chen, Future Legend of Skate and Sword. "Science fiction and fantasy are particularly effective in expanding notions of beauty in buildings and cities, which becomes relevant as cities experiment with new ways to solve population density issues."