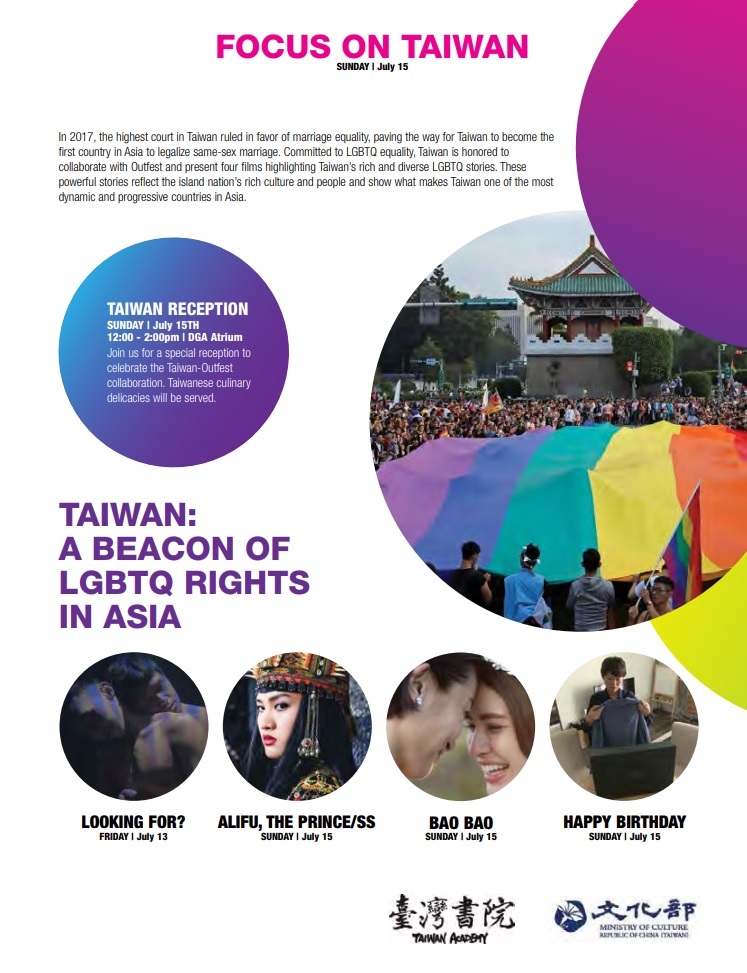 The Taiwan Academy in Los Angeles will present four films at Outfest, a festival celebrating the best LGBTQ stories from around the world from July 12 through 22, to show what makes Taiwan one of the most dynamic and progressive countries in Asia.

Explore the mysteries of dating apps in this charming, infectious documentary that lays all the sexy details out on the table. Young Taiwanese filmmaker Chou Tung-yen searches for a love of his own, as he questions gay men around the world about their intimate experiences on hookup apps. This is a refreshingly raw and far too relatable foray into digital romance.

A mosaic of LGBTQ storylines intersect in this portrait of gender identity in present-day Taiwan by director Wang Yu-lin. Alifu works as a hairdresser in Taipei and longs for gender-confirmation surgery, which may affect his status within his tribal Paiwan family. Sherry, a trans woman who owns a drag bar, is in love with a plumber who appears not to share her feelings. Chris is a government worker and lives with his girlfriend Angie — and also moonlights as a drag queen. Wang weaves these narratives into an empowering tapestry of love and its many forms. This five-minute short portrays the moment when a young girl realizes how much she has changed because of a relationship, and decides to be herself again on her birthday.

This deeply felt feature film debut by Shie Guang-cheng tells the story of Taiwanese expats Cindy and Joanne, living in London, who are about to have their first child. Their marital bliss is threatened when Cindy discovers that Joanne has promised their unborn son to another gay couple, their friends Charles and Tim. Told through an array of flashbacks, the film explores issues that affect many same-sex families.

A special reception titled "Celebrate Taiwan" will also be held at the Atrium of the Directors Guide of America on July 15 to mark the inaugural collaboration between Taiwan and Outfest. Taiwanese culinary delicacies will be served.

‘Taiwan: A Beacon of LGBTQ Rights in Asia’