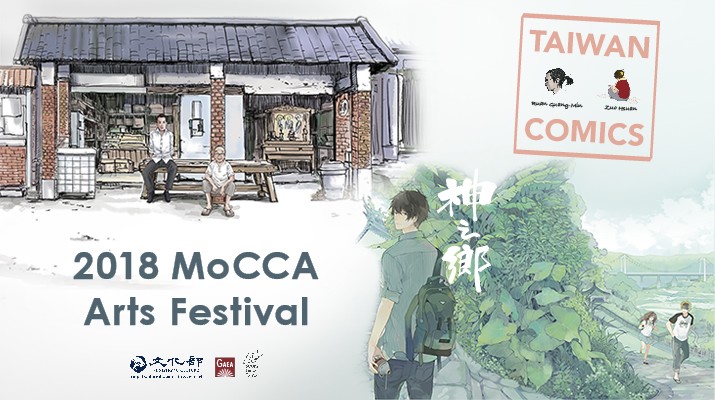 Comic books and illustration lovers are welcomed to meet with award-winning comic artists from Taiwan at this New York panel co-organized by the Taipei Cultural Center and the annual New York MoCCA Arts Festival on April 10. The artists would be pleased to introduce Taiwanese culture and customs to foreign readers through their comic art, including traditional Taiwanese foods, life style, religion, indigenous culture, temple festival, and more.

Ruan Guang-Min  阮光民
Ruan Guang-Min is a former advertising major and interior decorating major. After leaving the military he worked as an assistant to comic artist Lai Yu-Hsien. His first work to receive recognition was an adaptation of the TV show Friends, using the comic form to tell a moving story about a group of young people from the countryside struggling to make a living in Taipei. Conversely, his book Dong Hua Chun Barbershop was the first Taiwanese comic to be adapted into a television series. Representative works also include Heaven Restaurant, which touches on the relationship between food and memory, and a partial adaption of Wu Ming-Yi’s short story collection The Illusionist on the Skywalk. Ruan has been selected to represent Taiwan at the Angoulême International Comics Festival in 2012 and Frankfurt Book Fair in 2014. To learn more about Ruan, please visit: http://booksfromtaiwan.tw/books_info.php?id=82 (幸福調味料)  http://booksfromtaiwan.tw/books_info.php?id=172（用九柑仔店）.

In 2017, Ruan released “Yong-Jiu Grocery Store (用九柑仔店),” which takes inspiration from his own childhood memories with his grandfather. Through illustrating the stories of common people in Taiwanese society, the manga not only presents the everyday life in Taiwan but also brings back collective memories shared by all those who lived on the island. Ruan’s ability to imbue his stories with a sense of warm, touching humor and reconnect readers with the land of Taiwan through comics has made him the winner of the 2017 Comic of the Year Award with “Yong-Jiu Grocery Store” at the 8th Golden Comic Awards.

Zuo Hsuan 左萱
Zuo Hsuan started illustrating and creating comics in her college days by providing illustration for many novels' covers. Her works, including illustration and comics, deliver warmth and touch people, featuring presentation that visualizes delicate and sincere feelings.

In 2014, she released her first long comic work "The Summer Temple Fair" in "Creative Comic Collection," of which Gaea Books Co. later on published a separate edition in two volumes with copyright covering electronic comics in the Japanese version as well as application of music games.