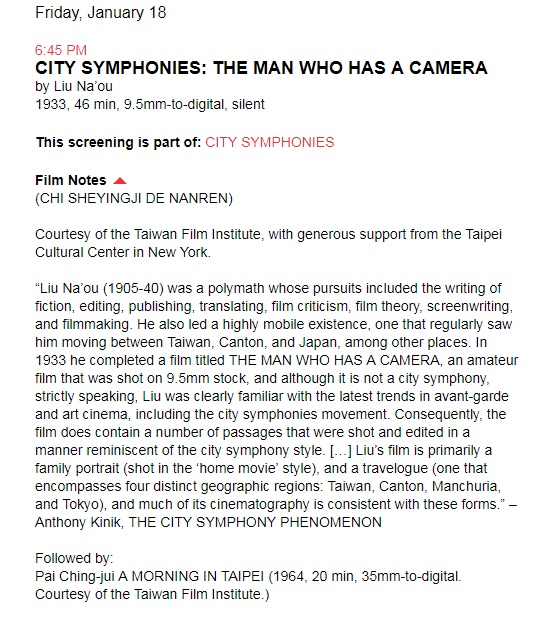 The Anthology Film Archives in New York will screen two early Taiwanese films from the 1930s and 1960s by Liu Na'ou (劉吶鷗), an enigmatic individual known for his pure and poetic take on cinema, and Pai Ching-jui (白景瑞), a Taiwanese pioneer of Italian neorealism, on Jan. 18.

Liu (1905 – 1940) was a Tainan-born and Japan-educated novelist and filmmaker who was associated with the "soft film" movement of 1930s Shanghai. From managing bookstores and publishing magazines to scriptwriting and film directing, he helped to introduce new theories from European cinema. Liu was assassinated under mysterious circumstances at the age of 35.

Liu's sole surviving film "The Man Who Has A Camera (持攝影機的男人)" contains five episodes: People, Tokyo, Sightseeing, Canton, and Parade. Originally shot on 9.5mm stock, the experimental documentary was donated to the Taiwan Film Institute by Liu's grandson, and was released episode by episode upon restoration.

Pai (1931 – 1997) studied filmmaking in Rome during the late 1950s, and became deeply influenced by Italian Neorealism. Although he helped usher forth a period of "healthy realism" in Taiwanese cinema, his own early works in the 1960s stood out for their avant-garde approach to video experimentation and choice of subject matter.

One of such works, "A Morning in Taipei (台北之晨)," was shot by Pai in 1964 upon returning from Italy and begins with the neon lights of Taipei City being swallowed by dawn. The lens traverses through parks, churches, markets, and factories before following the morning paper in joining the breakfast routine of a small middle-class family.

The two screenings are part of the "Cities Symphonies" series organized by the Anthology Film Archives to showcase classics from the 1920s and 1930s, where the eponymous genre began to take shape and evolve.

‘Man Who Has a Camera’ & ‘Morning in Taipei’