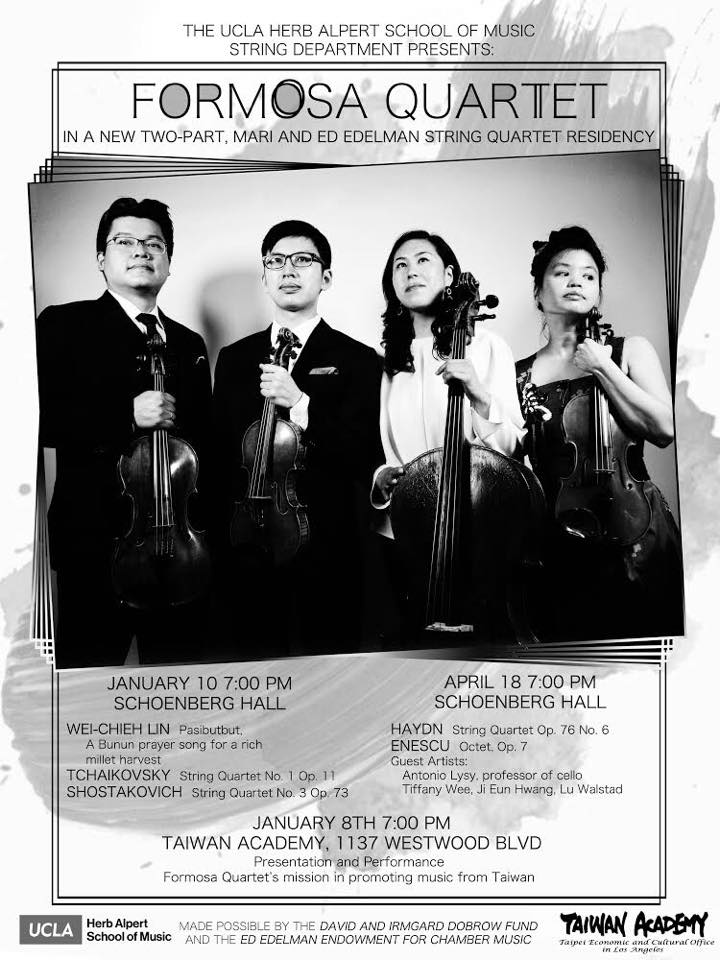 Taiwanese-American string ensemble Formosa Quartet will be holding three concerts in California this spring with the support of the Taiwan Academy in Los Angeles and the UCLA Herb Alpert School of Music. All concerts will be admission-free and open to the public.

The first concert will take place at the Westwood-based Taiwan Academy on Jan. 8. Partnering with the Ministry of Culture's branch office in Los Angeles, Formosa Quartet will promote Taiwan's diverse culture by bringing Formosa-inspired music, which has been Formosa Quartet's mission ever since it was founded 16 years ago. Their newly released album "From Hungary to Taiwan" features three commissioned works that juxtapose folk-influenced Hungarian classical and rural masterpieces with their Formosan counterparts. The door will open at 6.30pm, and a light reception will be held prior to the performance starting at 7.30pm.

Formosa Quartet comprises Jasmine Lin, Wayne Lee, Che-Yen Chen, and Deborah Pae. Chen is also a professor of viola at Herb Alpert School of Music. The three others are current faculty members at Eastern Michigan University, University of Illinois at Urbana-Champaign, and Roosevelt University, and have previously held positions at the Taos School of Music and Juilliard School.