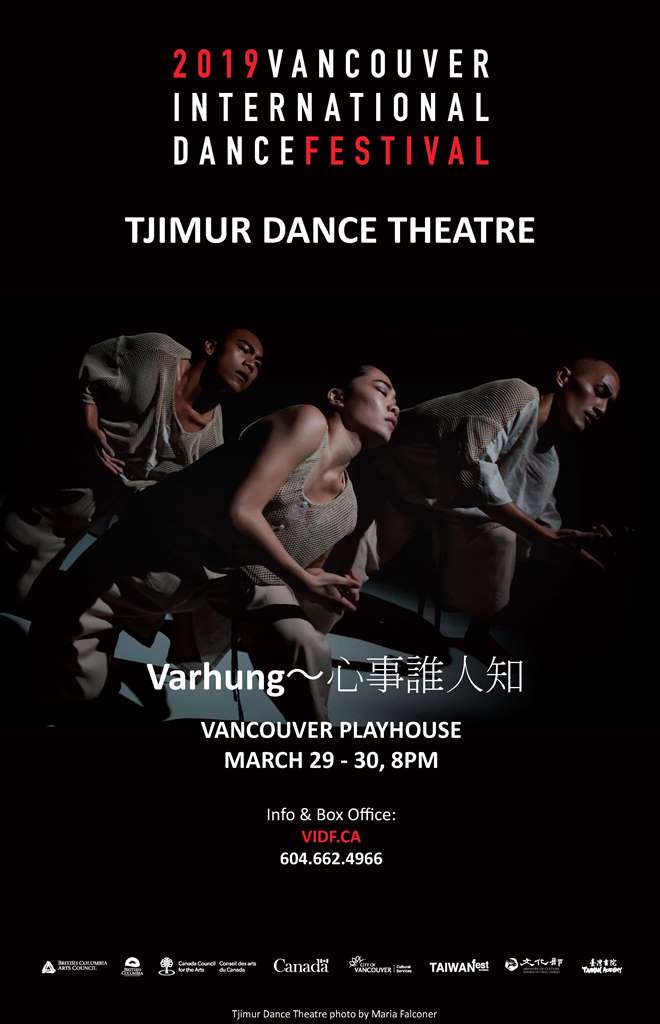 As one of the spotlighted artists at the 2019 Vancouver International Dance Festival (VIDF), Taiwan's Tjimur Dance Theatre (蒂摩爾古薪舞集) will not only be holding two performances on March 29 and 30 at the Playhouse in Vancouver, but also three workshops from March 24 through 26 that are offering the chance to become "mentally tipsy together" with the troupe's choreographer Baru Madiljin (巴魯．瑪迪霖).

The featured production, "Varhung ~ Heart to Heart," made a strong impression on VIDF Artistic Director Jay Hirabayashi, who invited Tjimur in hopes of introducing the indigenous Paiwan troupe to more Canadian audiences. This will be Tjimur's first appearance at the annual Vancouver festival season.

Baru noted that people often start to open up and talk about what's on their minds when they are slightly drunk, as the issues weighing on their minds are often hard to explain. Moreover, there are two types of roles, with one having a heavy heart while the other plays the listener, so the "70% tipsiness" tagline of this piece will also allow audience members to share what's on their minds with the performers on stage, Baru added.

The Pingtung native also compared the troupe’s employment of limbs in "Varhung" to the "drunken fist" fighting style from Chinese martial arts. At the initial rehearsal, performers were even taken to a karaoke bar to observe drunken movement, inspiring them to move their limbs in a tipsy manner. Yet this 60-minute dance remains replete with the tribal traditions and symbolism of Tjimur's deeply rooted indigenous heritage.

"Varhung," which refers to one's heart in the Paiwan language, is used to express an internal exchange of emotions and feelings elicited by an assortment of moods ranging from joy and happiness to sadness and anger. The Paiwan people have no written words ― their beautiful, elegant, and sincere emotions are conveyed through dancing and singing of flawless artistry.