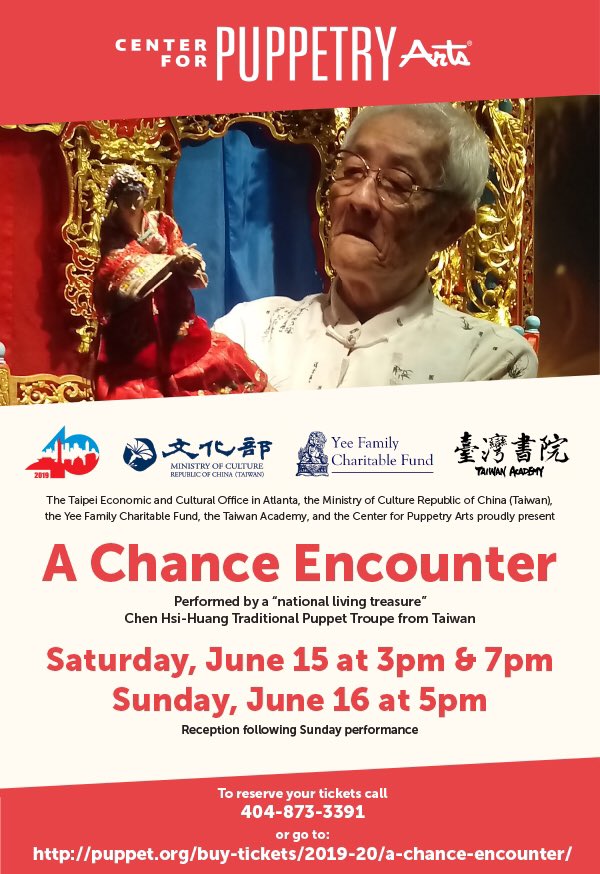 Puppetry master Chen Hsi-huang (陳錫煌), who is revered as a national living treasure of Taiwan, will lead his troupe to perform "A Chance Encounter Leads to Marriage (巧遇姻緣)" on June 15 and 16 at the Center for Puppetry Arts in Atlanta, Georgia. Post-performance sessions will also be held to showcase maestro Chen's sophisticated skills for puppet movements.

"A Chance Encounter Leads to Marriage" is a mesmerizing, traditional hand-puppet show that surpasses language and cultural barriers. This non-verbal piece tells the tale of a young couple's chance meeting at a festival that has puppets juggling, practicing acrobatics, performing martial arts, and much more.

Maestro Chen will also donate two Taiwanese glove puppets to the Center for Puppetry Arts, which will be displayed at the center for local and international visitors to learn more about Taiwan's traditional folk arts.

Maestro Chen is the only puppeteer in Taiwan to have been recognized by the Ministry of Culture as an important preserver of both traditional glove puppetry and classical glove puppet clothing and headwear props. He founded the eponymous Chen Hsi-Huang Traditional Puppet Troupe (陳錫煌傳統掌中劇團) in December 2008.

The main focus of Chen’s puppetry is "life." He wants his puppets to resemble people in all respects, including their postures, expressions, and movements. He also has a habit of describing what he wants from his puppets in terms of "asking" them, revealing a master's deep respect for the art he practices.

‘A Chance Encounter Leads to Marriage’