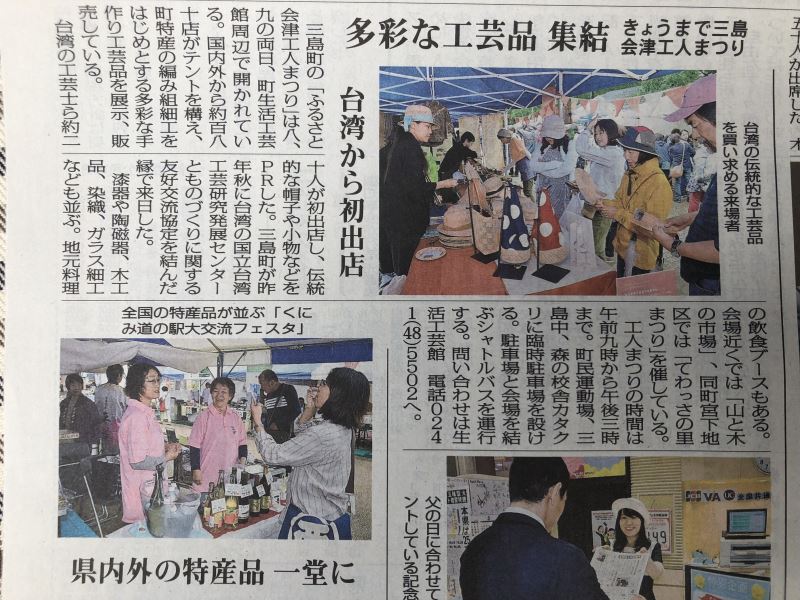 The 33rd Aizu Artisan Festival took place on June 8 and 9 at the Mishima Artisan Crafts Center in Japan's Fukushima Prefecture, drawing around 20,000 visitors to shop among 180 exhibitors peddling their proud crafts. The festival saw participants led by the National Taiwan Craft Research and Development Institute (NTCRI) for the first time this year.

Director Alice Wang Shu-fang (王淑芳) of the Ministry of Culture’s Taiwan Cultural Center in Tokyo was also present at the Aizu Artisan Festival to welcome the Taiwan delegation.

Last year, the NTCRI signed a memorandum of understanding with the Mishima government to strengthen the promotion and exchange of crafts between Taiwan and Japan. To cement the agreement, the Nantou-based institute organized its inaugural delegation for visiting the artisanal festival this year, making these Taiwanese associations the first-ever foreign participants at this show.

In recent years, the NTCRI and Taiwan’s Soil and Water Conservation Bureau have been working together on supporting rural micro-enterprises in the crafts trade, with the aim of invigorating the waning handicraft industries in Taiwan’s remote areas by identifying their unique characteristics.

Noting that the institute has launched a new wave of rejuvenation plans this year to help Taiwan's rural communities develop their characteristic crafts, NTCRI Director Hsu Keng-hsiu (許耿修) pointed out that the NTCRI-led delegation has received coverage in 36 Japanese media reports, which translates into wider international recognition of Taiwan's crafts.

Meanwhile, from the visit, Taiwanese artisans have learned more about how their Japanese counterparts brought new life to their trades. This summer, the NTCRI will receive a delegation of handicraft specialists and academics from Japan at a crafts exhibition scheduled for August that will showcase wares from Taiwan's rural communities as a part of the exchange plan with Mishima.