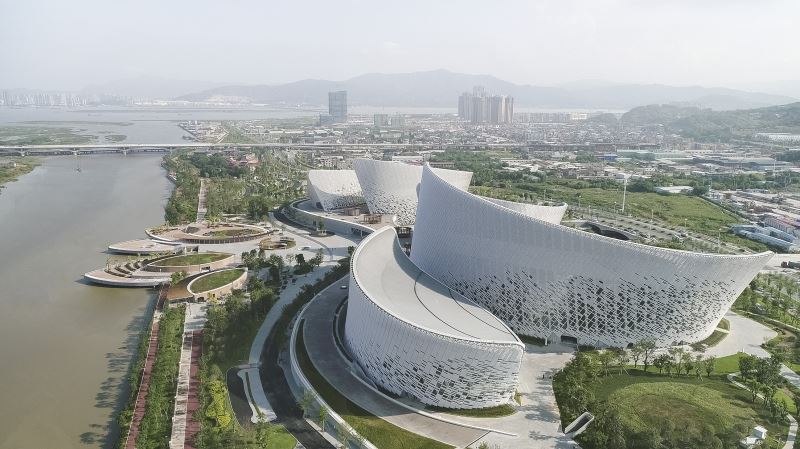 Shih has been producing ceramic art for over 25 years and holds the title of being the first Taiwanese artist to win prizes at Premio Faenza, International Competition of Ceramic Art in Italy, one of the four major competitions in the global ceramics community.

During the spring of 2016, Finnish architect Pekka Samiin, founder and senior partner of PES-Architects, made multiple trips to Taiwan to meet with Shih. Shih proposed a modern contemporary design that took inspiration from the ceramic designs and styles of the imperial Yuan, Ming, and Qing dynasties. After reviewing the proposal, Samiin immediately partnered with Shih to implement his design and construction concepts.

The SCAC complex houses an opera house, a concert hall, a multifunctional theater, a cinema center, and an exhibition hall — located in separate petal-shaped buildings and linked by a cultural concourse and a large roof terrace. Constructed with a budget exceeding NT$13 billion, SCAC covers an area of 150,000 square meters.

The building's visionary design defies traditional acoustics, as both the interior and exterior of the opera house and concert hall are built with pottery and porcelain elements. The opera house itself is more than 3,000 square meters and consists of 1.5 million components that come together as one meticulous and magnificent venue.

3D printing technology was used for making the structural components and the ornamental ceramic tiles were carved one by one by robotic arms. Then, Nordic engineers conducted acoustic- and density-tuning by using computer stimulation to streamline the size, angle, density, and depth of each component to ensure optimal sound reflection within.

The SCAC opera hall received bronze and the SAC concert hall was a finalist in the "Cultural Venues" category of the 2019 World Interiors News WIN Awards. For the 2019 World Architecture News WAN Awards, SCAC received silver in the "Façade" category and a bronze in the "Waterfront" category.