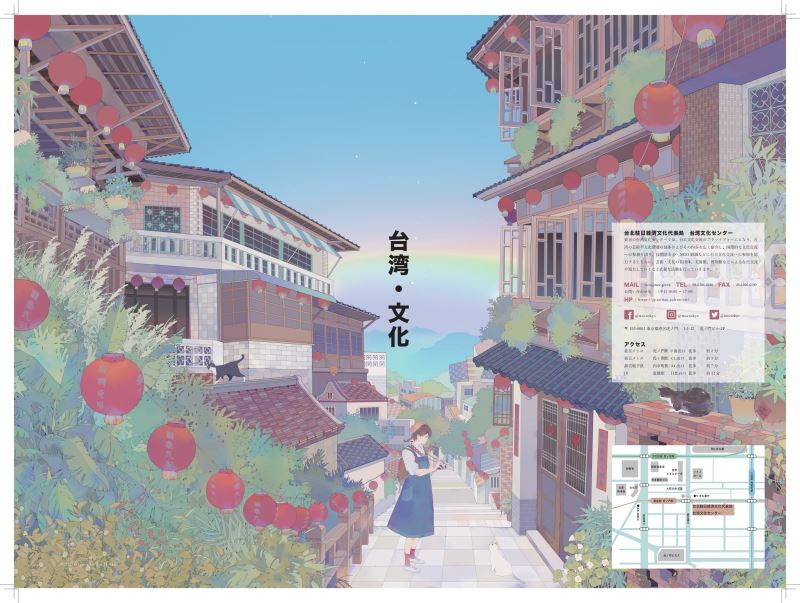 Comic artist Zuo Hsuan (左萱) has designed a special promotional flyer for the Taiwan Cultural Center in Tokyo. Her delicate and sensational style of art presenting the different facets of Taiwan was extremely well-received in Japan.

Alice Wang Shu-fang (王淑芳), director of the cultural center, remarked that the Ministry of Culture coordinates many Taiwan-Japan cultural exchange programs and events every year, and a yearly pamphlet is always produced and given to the Japanese public. She added that, because comics are extremely popular in Japan, the center searched for Taiwanese comic artists to participate this year so they could showcase the nation's culture through unique illustrations.

Zuo Hsuan was the winner of a 10th Japan International Manga Bronze Award and has represented Taiwan at the Angoulême International Comics Festival in France, the Frankfurt Book Fair in Germany, and the Kitakyushu International Manga Festival in Japan. Her debut comic book, "The Summer Temple Fair (神之鄉)," which tells the story of the annual Holy Emperor Guan procession at Daxi in Taoyuan, has been translated into Japanese and French, and there is a live-action adaption in the works.

Zuo Hsuan emphasized that it was an honor to draw the flyer and that, in addition to displaying the food and beauty of Taiwan, she wanted to the showcase the ordinary and lovely features of everyday Taiwanese life, such as decorated tiles and floral-patterned iron window grilles. The emotional piece has made her to want to go and explore historic Taiwanese towns again, she added.

Lee Ya-lun (李亞倫), the editor-in-chief of Gaea Books Co. (蓋亞文化) who spearheaded the project, commented that Zuo Hsuan’s style is elegant and charming, colorful yet subtle. The illustration highlights unique facets of Taiwanese culture such as its literature, architecture, tea art, railways, and other creative elements, unified by the simple and sophisticated style of graphic designer Jupee (朱疋), who was commissioned to help produce the flyer. The overall effect is polished and extraordinary, he added.

In addition to introducing Taiwanese life and activities, the flyer also depicts cultural attractions including the Taiwan Comic Base, National Kaohsiung Center for the Arts, National Railway Museum, and National Taichung Theater.

The flyer was so popular with the public that the cultural center plans to use Zuo Hsuan's illustration on other stationary products, such as notebooks, folders, and customized paper bags. These will serve as marketing tools to introduce Taiwanese comic art to the people of Japan and enhance the cultural recognition of Taiwan.