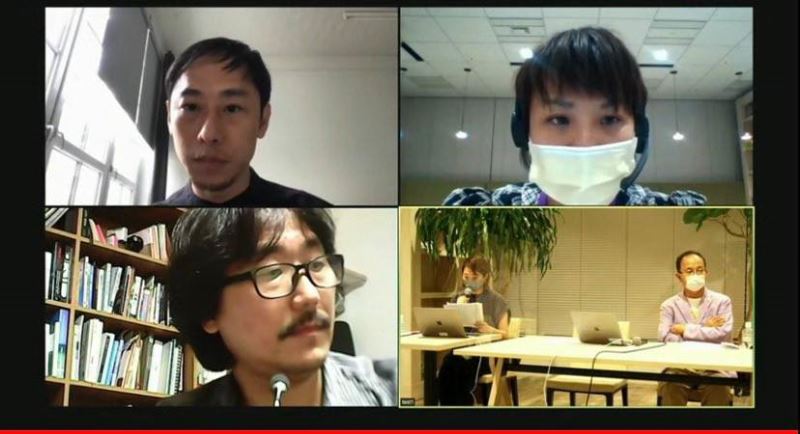 The first online session of the lecture was broadcast live on Bijutsutecho’s Youtube channel at 8 pm on Aug. 30 (Japan Standard Time), showing the diverse value and creative energy of Taiwan’s artistic achievements.

Fram Kitagawa stated that he has been following closely as well as inviting Taiwanese artists to display their works. Although only some works were presented at this year's Echigo-Tsumari Art Triennale and the Oku-Noto Triennale due to the pandemic-induced constraints, but he is happy that two different styles of works - LuxuryLogico's "Fly! no matter what (天氣好不好我們都要飛)," and Tu Wei-cheng's "Whales Legend Ruins (鯨魚傳說遺址)" - will exhibit in Japan this year.

Germany-based artist Chen Chih-chien shared that, through this workshop, children from the Echigo-Tsumari area were invited to create drawings of weather birds. The animation produced after scanning the drawings will be previewed at the Echigo-Tsumari Satoyama Museum of Contemporary Art this year, and he looks forward to seeing the official exhibition next year.

Tu Wei-cheng illustrated that his exhibited works are based on the whale history and legends of the Noto Peninsula. To lead audiences to rethink the spiritual needs of mankind for legends, he created an excavation site similar to an archaeological site and coupled with the pseudo-News and the AR tour guide to increase the interactivity and attractiveness.

Finally, Fram Kitagawa complimented the depth and maturity of the two artists and felt honored to be able to invite them to exhibit in Japan while expressing that Taiwan's adequate resources and support for artists is an important reason for nurturing many outstanding artists.