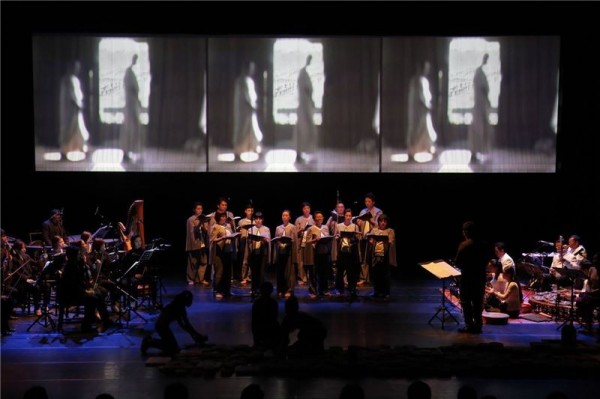 The world premiere of "A Requiem for Cambodia: Bangsokol,” a collaborative musical by the Taipei Philharmonic Chamber Choir and Cambodian musicians, has opened to positive reviews at the 2017 Melbourne Festival.

The production was created by a team of international artists. Based on Khmer Rouge brutality that killed 80 percent of Cambodian artists around 1975, the production incorporates music and media with diverse elements to vividly present this painful history and promote peace.

With former artistic director Gideon Obarzaznk of Chunky Move serving as stage director, the production was highly acclaimed by the Sydney Morning Herald, which praised the Taipei Philharmonic Chamber Choir for its outstanding performance of complex pieces in beautiful harmony.

Chief Executive Officer Kath Mainland of Melbourne Festival also noted that the Taipei Philharmonic Chamber Choir's music is of world-class standard, and the accompanying images are also highly impressive and unbelievably touching. The musical bestows audience members with a positive attitude toward the future, Mainland added.

American Conductor Andrew Cyr also expressed his thanks to Cambodian Living Arts and the Taipei Philharmonic Foundation for Culture and Education for telling Cambodian history. To him, "A Requiem for Cambodia: Bangsokol” represents peace, hope, and the best of human nature.

Cambodian Living Arts Executive Director Phloeun Primreiterated his respect to the choir for overcoming the difficulties of the Cambodian and Pali languages, and lauded the choir for reciting and singing the whole musical from memory.

Established in 1986, the Melbourne Festival is one of the most significant international festivals in Australia celebrating culture, art, music, and theater.

Following the performance in Melbourne, "A Requiem for Cambodia: Bangsokol” will be staged this December in New York's Brooklyn Academy of Music and then Philharmonie de Paris. Tour dates available here.