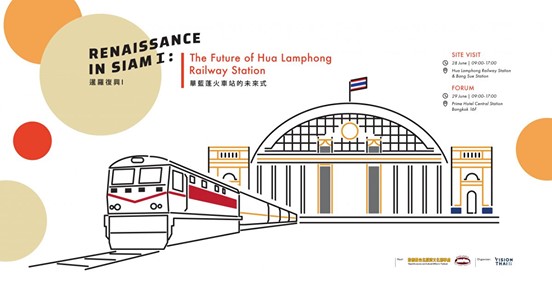 During the June 28 "Site Visit of Thailand Railway Cultural Venue," experts from the SRT showed Taiwanese scholars around the exhibition hall and railway facilities at Hua Lamphong Station before the group headed for Bang Sue Station to gain insight on the latest developments in Thailand's railway system.

The "Taiwan-Thailand Railway Museum Experiences Sharing Forum" was held the following day on June 29, drawing nearly 70 participants. Acting SRT Governor Worawut Mala gave the keynote speech, focusing on how the century-old Hua Lamphong Railway Station could best be reused, and that the opinions of the experts and scholars present from both Taiwan and Thailand would provide a valuable reference in the process.

At the forum, SRT Director Dr. Siripong Preutthipan and two other Thai railway experts shared their knowledge of the development, evolution, and planning model of Thailand's railways. Scholars from Taiwan, meanwhile, shared their own expertise in railways and cultural preservation.

Prof. Huang Chun-ming discussed the origins of the Taipei Railway Workshop and the cultural preservation work involved, and Prof. Hung Chih-wen gave an overview of the history of Taiwan’s rail network and the development of the exhibition halls at the historic Railway Division near Beimen MRT Station. Prof. Monica Kuo, meanwhile, explored the development of green spaces and cultural facilities along former rail lines, drawing on Taipei's experience with the undergrounding of its railways.

Chen Kuan-fu, head of the Cultural Division of the TECO in Thailand, presented a structural overview of the history of Taiwan's policies toward cultural infrastructure, reuse of heritage spaces, community buildings, cultural facilities, the National Memories Database, and studies of local heritage.

He also talked about how these policies have tied in with Taiwan's museum policies, offering examples of some 50-plus cultural heritage locations around Taiwan that have been transformed into local cultural centers and hubs for the cultural and creative industries, and presenting case studies of efforts in Kaohsiung, Tainan, and Hualien.

He then closed his presentation with a five-point set of recommendations on how Thailand could coordinate the revitalization of tourism in the old city with where local museums are positioned, and how they could work with residents to collect items and cultural memories that could be leveraged in the effort to reuse spaces and coordinate them with community empowerment and public education plans.

A roundtable session held after the forum focused on the rebuilding of cultural facilities and surrounding neighborhoods around the railways. A group of five Thai and Taiwanese experts exchanged their thoughts about railway cultural heritage preservation strategies, Taiwan's model of railway culture preservation, and Thailand's cultural preservation policies.

A group of Thai railfans who had visited Taiwan also shared their experiences on how Taiwan had developed new railways while preserving relics of the old so that future generations can appreciate the country's rail history.

They also talked about how the Taiwan High Speed Rail Museum was established not long after its namesake railway to showcase not only the stories of those involved with its construction, but also to offer interactive experiences like a simulation of driving an HSR train — innovative ideas that could provide a valuable reference for Thailand.