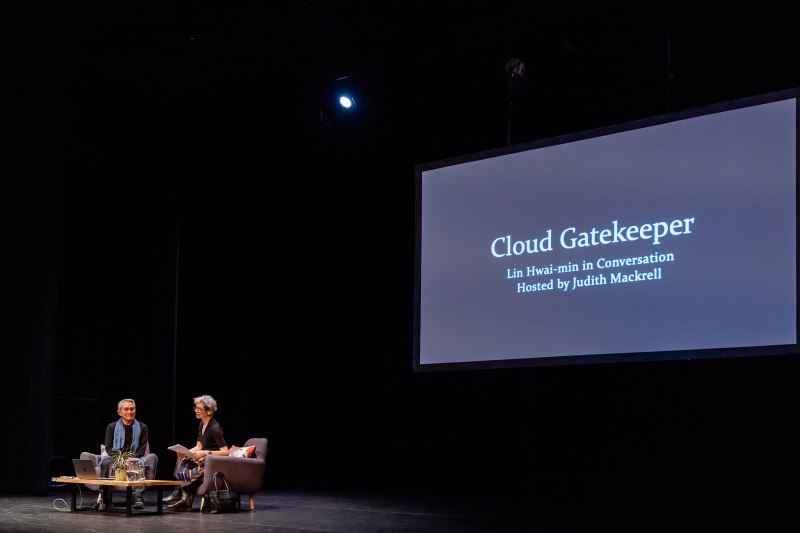 The Cultural Division of the Taipei Representative Office in the UK and the Trinity Laban Conservatoire of Music and Dance invited Cloud Gate Dance Theatre founder Lin Hwai-min (林懷民) to hold a public conversation with The Guardian's senior dance critic Judith Mackrell on the breadth of Cloud Gate Dance Theatre's development over the past 46 years at Laban Theatre on Feb. 20.

The talk was befittingly themed "Cloud Gatekeeper," marking the Cloud Gate patriarch's first return visit to the British institution after retiring in 2019. The Guardian's dance commentator Mackrell opened for the talk, reveling in the impact of the dance company in Taiwan when she participated in an outdoor performance last year, and asked Lin to discuss the establishment, concept, and creative body language of Cloud Gate.

The 90-minute conversation was accompanied with clips of the dance company's historically important works, including "The White Serpent Tale (白蛇傳)," "Legacy (薪傳)," "Nine Songs (九歌)," "Moon Water (水月)," and "Cursive: A Trilogy (行草三部曲)," to the more recent "Formosa (關於島嶼)." The excerpts took audience members on a journey through time and space to witness the struggles, breakthroughs, and innovations of the dance troupe since its founding in 1973.

"Ask not what your country can do for you — ask what you can do for your country," quoted Lin, explaining that the founding of the dance group was inspired by such sentiments embodied by the 1961 inaugural speech of US President John F. Kennedy, the founding creed of Peace Corps, and the training undertaken by the now-scarce "barefoot doctors" in rural China.

"Barefoot doctors" were farmers, healers, and healthcare providers who promoted hygienic practices and treated common illnesses in rural villages, which led Lin to believe that performances could be another way to contribute to Taiwanese society.

Lin also stressed that the creation of performances and dance-training programs stem from recognition of the differences between eastern and western cultures. Moreover, from their respective mythologies and architectural aesthetics, it is not hard to see why western ballet pursues straight and towering lines, while eastern choreography is presented in circles or curves.

Through this understanding of different styles and cultural aesthetics, Lin took a different path to develop performances for Cloud Gate, integrating Tai Chi methods to train dancers to breathe, meditate, and move.

Lin emphasized that engaging local communities and performing in rural areas has always been an important mission of Taiwan's first professional dance troupe. Back in the era when Taiwan's performance venues were still very scarce, Cloud Gate would set up a stage in baseball stadiums to perform in different regions. To this day, Cloud Gate continues to tour the Taiwanese countryside every year.

For example, local residents who participate in the troupe’s outdoor performances in Taitung's Chishang Township have improved their self-identity and regained confidence in their township, he said, noting that such opportunities also boost younger generations' willingness to return to their rural hometowns.

Now active for more than 40 years, Cloud Gate is also an important constituent of Taiwan's culture. To illustrate this interdependence between Cloud Gate and Taiwanese society, Lin also shared the story of the dance troupe's rehearsal ground being burnt down in 2008, only to gain a new home with the support of public and private patrons.

Near the end of the talk, audience members asked Lin how he chose the music for each performance, succession of the dance company, and approach to new media. Lin responded that Cloud Gate is and will remain a collective effort and paid special tribute to associate artistic director Lee Ching-chun (李靜君) and senior dancer Su I-ping (蘇依屏), who were both in attendance.

Lin also commented on the unique creative thinking and strong execution ability of the newly appointed artistic director Cheng Tsung-lung (鄭宗龍), stating he has full confidence that Cheng will be able to meet future challenges and that Cloud Gate will "continue to perform better than before."

Anthony Bowne, principal of Trinity Laban Conservatoire of Music and Dance and Lin's personal friend of twenty-some years, remarked that he was extremely happy to help organize this talk. Taiwan's Representative to the UK David Lin Yung-lo (林永樂) also attended the event and delivered a speech expressing his sincere gratitude for Lin and Cloud Gate's roles as global cultural ambassadors of Taiwan and their shared dedication to local cultivation of the arts.