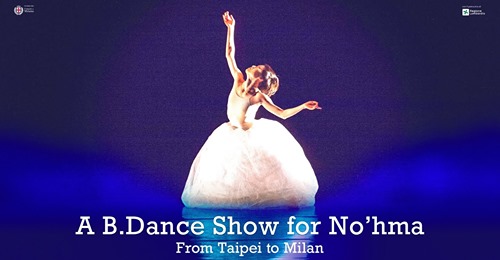 At the invitation of the Milan-based Spazio Teatro No'hma Teresa Pomodoro Theater in Italy, Taiwanese dance troupe B. Dance virtually performed four pieces on the theater’s Youtube channel. The performance, titled "A B. Dance Show for No'hma," premiered on May 27 and received much acclaim.

B. Dance troupe creative director Benson Tsai (蔡博丞) specifically chose four different works: "Floating Flowers (浮花)," "Hugin/Munin," "Abyss (深深)," and "Orthrus." The performance is dedicated to the complexity and relationships of mankind, in addition to mankind's relations with nature. Each of these pieces, where dance becomes a universal contemporary language, is able to describe different cultural traditions – from Greek mythology, Scandinavian legends, to Buddhist traditions -- with both deepness and lightness, while also exploring issue of environmental sustainability.

To fit the theme of environmental sustainability, which is the common denominator of the entire season at Teatro No'hma, B. Dance performed "Abyss," a piece on the subject of polluted water. The performance begins with a single dancer on stage, acting as a metaphor for a beautiful, yet polluted and sorrowful earth. Other dancers then join the stage, moving and gliding along with the background music of the double violin concerto "Tabula Rasa" by Estonian composer Arvo Pärt. The piece aims to draw attention to environmental issues paralyzing our earth.

Even though the COVID-19 pandemic has brought restrictions to our daily lives and B. Dance's original international tour in Europe has been temporarily cancelled, the dance troupe will continue to connect with the world in multiple ways.