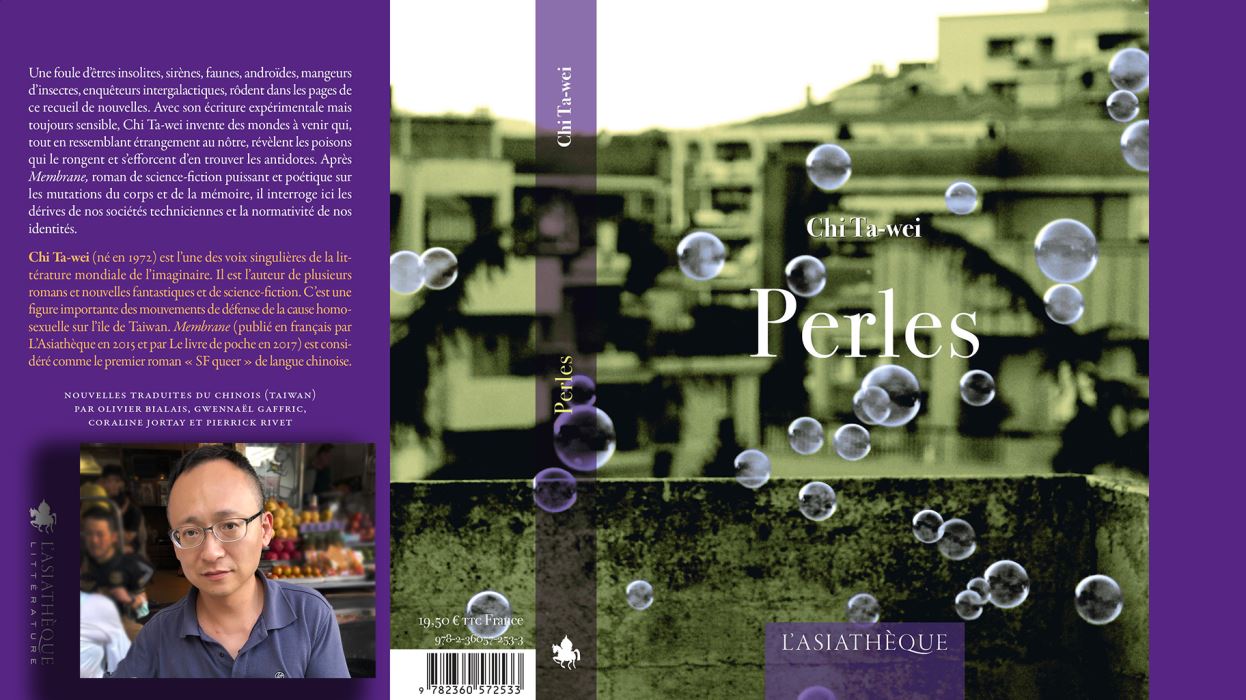 In mid-August, French publisher L'Asiatheque has released a short story collection "Pearls (珍珠)" by Taiwanese writer Chi Ta-wei (紀大偉), who is best known for queer literature and praised by the Japanese media as "Standard-bearer of Queer Light Novels."

"Pearls" consists of five short stories that have been published in Taiwan: "The Afternoon of a Faun," "The War is Over," "Eclipse," "In the Bottom of His Eye, the Palm of Your Hand, a Red Rose Is about to Bloom," "The Mermaid's Comedy," and "Pearls" – Chi's latest work created especially for the publication in the European country.

Due to COVID-19 related travel restrictions, Chi was unable to travel to France to promote the book. In a written message to the readers, the 48-year-old novelist said, following the French language edition of his sci-fi novel "Membrane (膜)" was released in 2015, he was encouraged by French writer Gwennael Gaffric, who translated "Membrane," and the publisher to keep on writing sci-fi stories.

"I also learned that a fair amount of French critics that I don't personally know had published reviews of 'Membrane,'" the writer wrote, adding that the popularity of the novel prompted him to draft up ideas for his next science fiction.

Explaining the inspiration of his pearl-themed work, the writer said during his visit to Europe, he noticed that Taiwan's signature drink pearl milk tea, also known as bubble tea, has taken many European countries by storm. So as to say, bubble tea has become a symbol for Taiwan in Europe as well as East Asia, Chi added.

While "Membrane" discusses the texture of a thin layer, "Pearls" explores what impressions pearl milk tea and also real pearls have given to modern-day people, the Taichung-born author said.

Born in 1972, Chi explored the concepts of sexuality and physical desires when he just started writing in the early 1990s, despite the topic of sexuality was a taboo in Taiwan society at that time.

In 1995, Chi released his debut novel "Queer Senses: A Story Cycle of Sexualities (感官世界)," through which Chi used bold language to reinterpret fairy tales and to explore homosexuality and social morality from LGBTQ+ perspectives.

The following year, he published "Membrane." Set in a high-tech future where humans are forced to live underwater to protect themselves from UV radiation, the story revolves around an android controlled by a human brain and explores the definition of humanity and gender.

The publication of "Pearls" is a joint effort made by L'Asiatheque and Centre culturel de Taiwan à Paris, Taiwan's second-ever overseas cultural center following the 1990 launch of the Taipei Cultural Center in New York.