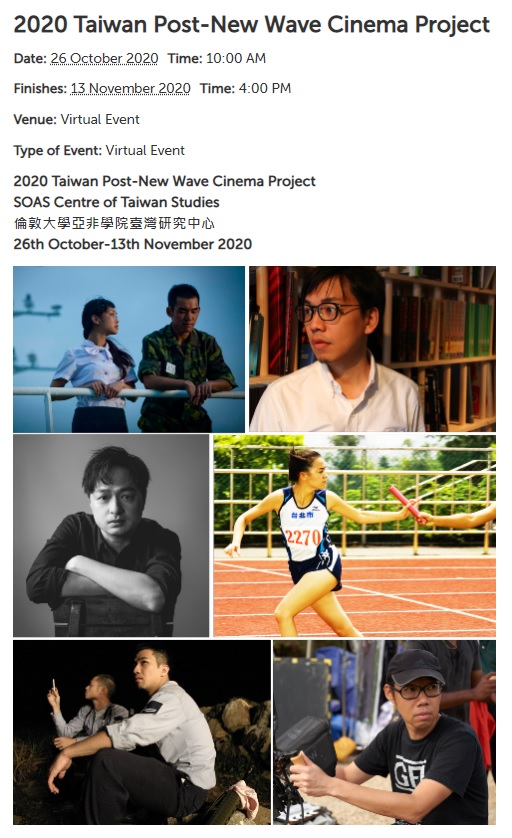 The Centre of Taiwan Studies of the London-based School of Oriental and African Studies (SOAS) showcased a total of 15 films by three "new auteurs" in the post-New Wave Taiwan Cinema, followed by director Q&A sessions, via online event-planning site Eventbrite from Oct. 26 to Nov. 13.

The series was part of the centre's Taiwan Post-New Wave Cinema Project designed to examine the works by highly accomplished yet under-examined filmmakers Hou Chi-jan (侯季然), Lin Shu-yu (林書宇), and Cheng Yu-chieh (鄭有傑). The three have followed Taiwanese cinema's auteurs of the late 1980s, such as Hou Hsiao-hsien (侯孝賢) and Ang Lee (李安).

The presentation was followed by the screening of Lin's four cinematic works, including "Starry Starry Night (星空)," "Zinnia Flower (百日告別)," "The Pain of Others (海巡尖兵)," and "Winds of September (九降風)" from Nov. 2 to 6.

Each director focused film series was followed by a virtual director Q&A session.

The rejuvenation of Taiwanese cinema in the 1980s known as the New Wave marks the rise of authorship paradigm focusing on the art-house auteurs such as Hou Hsiao-hsien, Edward Yang (楊德昌), Ang Lee, and Tsai Ming-liang's (蔡明亮), and it is hugely influential and renowned, according to the organizer.

Following the commercial success of several popular films made by the new generation Taiwanese filmmakers in 2008, the era of the post-New Wave Taiwan Cinema has arrived, the centre explains.

"It is hoped that the upcoming screenings will stir discussion on a new generation of Taiwan filmmakers, in addition to fostering a greater appreciation and a deeper understanding of Taiwanese cinema among U.K. and European audiences," Dr. Chen Pin-chuan (陳斌全), director of the Cultural Division of the Taipei Representative Office in the U.K., said.

Since the establishment of the Taiwan Studies Programme in 1999, the School of Oriental and African Studies has become one of the leading centres for Taiwan Studies in the world, according to the SOAS's website.