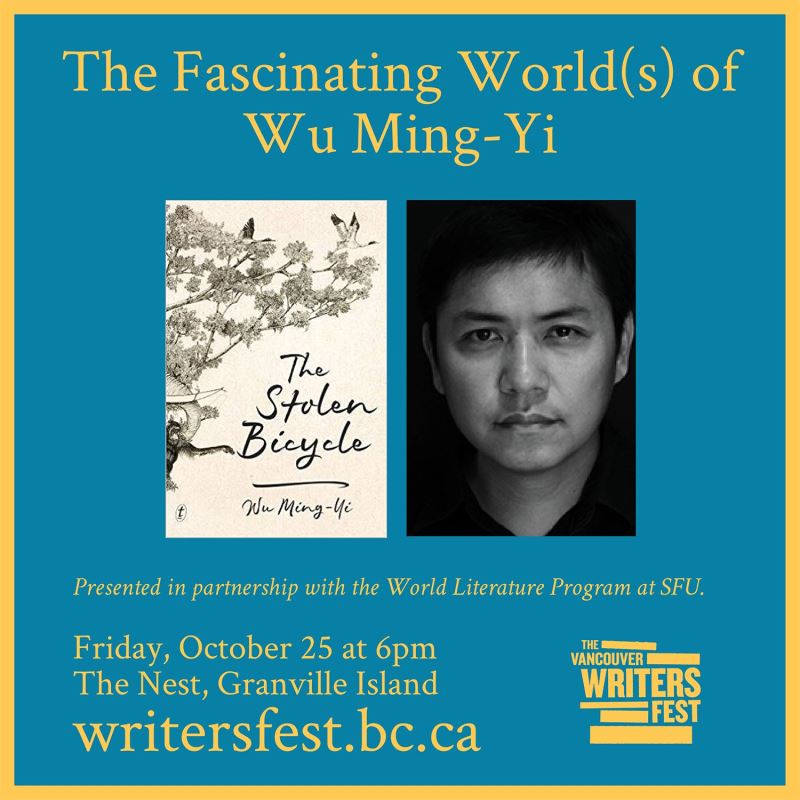 Taiwanese novelist Wu Ming-yi (吳明益) and Edmontonian translator Darryl Sterk (石岱崙) were invited to participate in the Vancouver Writers Fest on Oct. 25. The tickets for "The Fascinating World(s) of Wu Ming-Yi" lecture and book-signing event were sold out well beforehand and a long queue of people were waiting during the opening. This demonstrates how Taiwan's outstanding literary works are gradually being recognized on the global stage.

Talking with moderator Anna Ling Kaye, a Journey Prize-shortlisted writer, Wu and Sterk's humorous interactions packed the event with laughter from the audience. Readers were most curious about the author's writing style that intertwines fantasy with reality, as well as his way of depicting war, history, and nature in "The Stolen Bicycle (單車失竊記)," a captivating novel that was longlisted for the Man Booker International Prize in 2018.

Wu responded that as a child who grew up in the city before moving to rural Hualien, he made many indigenous friends who showed him Taiwan's scenic mountains and oceans. Through these immersive experiences of being deeply in touch with nature, he honed his unique writing style and continues to care for the environment, as evident in the ecological themes of his works.

Originally from Canada, Sterk has been living in Taiwan for many years and now identifies with being a Taiwanese. He pointed out that translating Wu's novel made him more aware of the natural environment around him and cultivated a deeper understanding of Taiwan’s history.

In addition to the Vancouver festival, they also met with readers at the Vancouver Public Library, University of British Columbia, and Simon Fraser University. All the events received enthusiastic responses from the audience. Charlie Smith, editor-in-chief of Vancouver's weekly newspaper Georgia Straight, interviewed Wu before the events and published a long feature on Oct. 23. The feature also introduced Wu's creative journey and the historical and political subjectivity of Taiwan as discussed in the novel.

Director of the Taiwan Academy in Los Angeles, Emmy Yang (楊婷媜), remarked that this is the first time in many years that a Taiwanese writer has been invited to the festival. Besides invoking interest and appreciation of Taiwanese literary works during this interactive event, it also increases publicity and creates more market opportunities for Taiwanese literature, Yang added. Moving forward, the Taiwan Academy will continue working with the Ministry of Culture's translation programs to promote exceptional Taiwanese authors and poets to the international literary world.