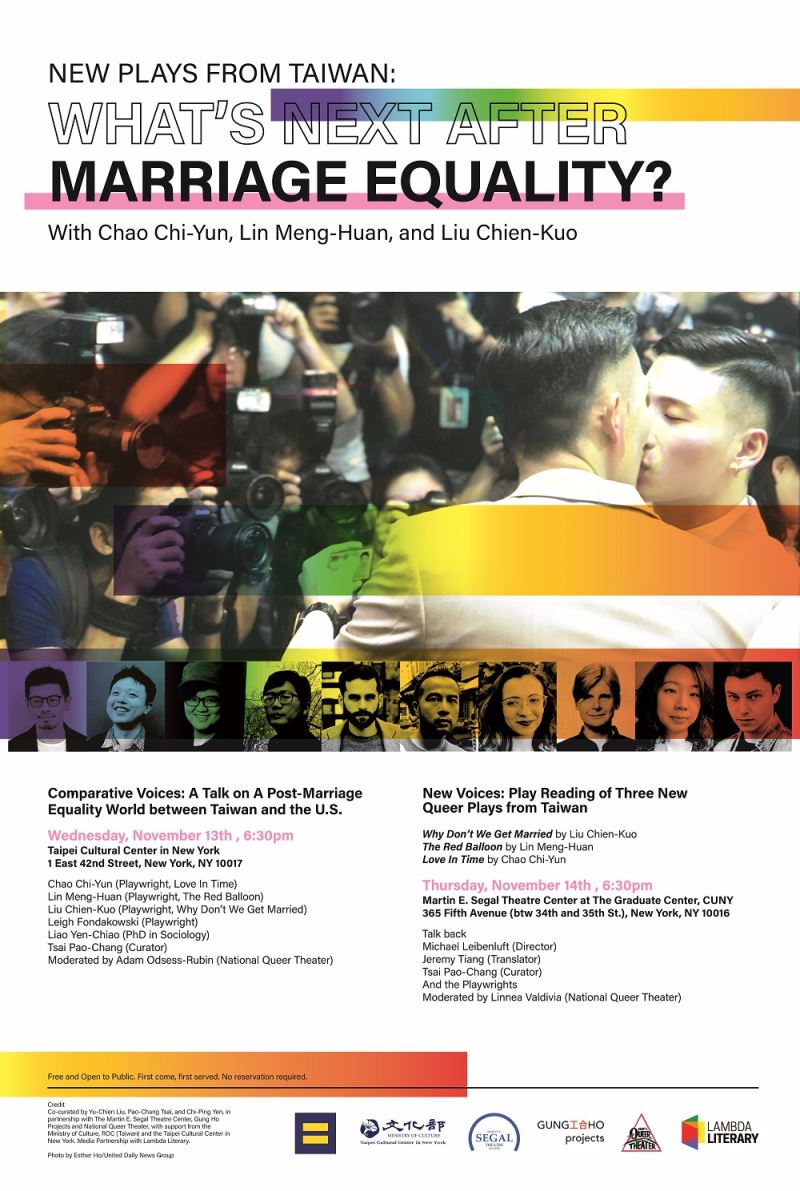 With Taiwan making history in May this year as the first country in Asia to legalize same-sex marriage, the Taipei Cultural Center in New York carried forth the momentum by hosting a two-day event on queer theater and LGBTQ+ topics for playwrights, scholars, and moderators from the United States and Taiwan on Nov. 13 and 14.

The Nov. 13 event at the Taipei Cultural Center in New York was moderated by Adam Odsess-Rubin, artistic director of the National Queer Theater. The attendees — including gender researchers, New York-based theater workers, and Taiwanese playwrights — touched upon topics spanning the progress of the marriage equality movement in both countries, challenges encountered by queer theater professionals, and strategies for fostering a gender-friendly environment that facilitates theatrical works.

On the following day, a reading of three new Taiwanese short plays took place at the Martin E. Segal Theatre, a center operating under the aegis of the City University of New York's The Graduate Center. Moderated by Linnea Valdivia, literary manager for the National Queer Theater, the readings were followed by a discussion with the featured playwrights and curators.

The three short plays — "Why Don't We Get Married" by Liu Chien-kuo (劉建幗), "Love in Time" by Chao Chi-yun (趙啟運), and "The Red Balloon" by Lin Meng-huan (林孟寰) — not only deal with the various situations facing society after marriage equality becomes a reality, but also provokes reverse thinking on issues that are still controversial, noted event curator Tsai Pao-chang (蔡柏璋).

While "Why Don't We Get Married" discusses the essence of marriage and love through the lenses of its two female protagonists, "Love in Time" is a play about two sisters who plan to arrange a posthumous wedding for their late father and his boyfriend. "The Red Balloon," on the other hand, takes on controversial practices that attempt to change an individual's sexual orientation or gender identity through medical means.