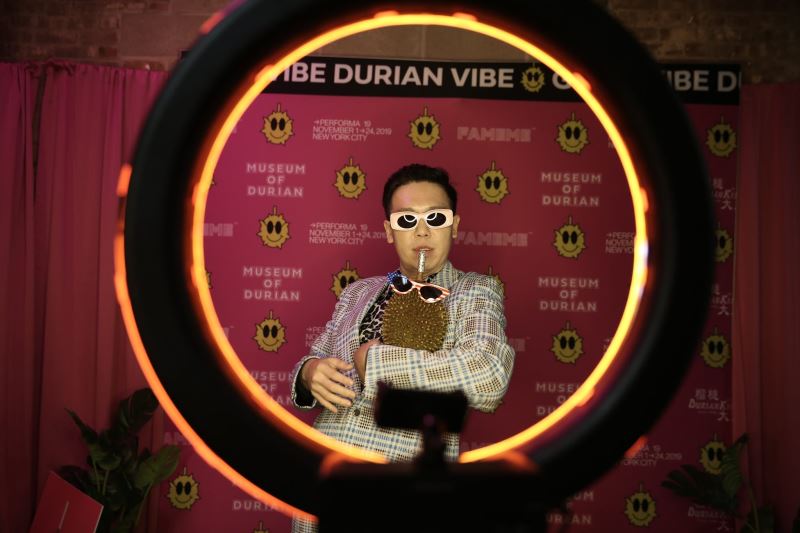 This fall, Taiwan and Sweden were invited to be the theme countries of the famed Performa Biennial for the first time. Dedicated to live performances, the biennial's eighth edition took place over a period of three weeks, from Nov. 1 through 24, at different locations throughout New York City.

Among them, Yu's "FAMEME" performance was chosen by the Times Square Alliance to be featured on the largest TV wall of New York Times Square. The grand debut of "FAMEME" was shown for 24 hours on rotation starting from midnight on Nov. 21.

"FAMEME" uses the role of social influencers to explore the American Dream and stereotypes of Asian cultures. As Yu styled himself as the "Durian King of Asia" for the performance, a popup Museum of Durian also opened at Wallplay studio, which is located at the conjunction of the contrasting SoHo and Chinatown areas in New York City.

Displaying promotional videos, durian samples, online selfie props, and related cultural and creative merchandise, the Museum of Durian had its grand opening on Nov. 2 and many New Yorkers and tourists have visited and "checked in" on social media since.

The "Durian King of Asia" uses all kinds of ridiculous situations and popular influencer marketing methods to pursue his capitalist needs. This work explored the cultural phenomena and issues of the power of social media, the challenges of the digital age, and the authenticity of information.

Elsewhere in New York City, technological pioneer artist Cheang presented "Sleep1237" to explore the cultural and physical expressions of sleep, which was followed by a screening and public discussion of her early innovative works.

Chou examined the systems of labor, exchange, and trade in construction and real estate against the backdrop of SoHo, a former industrial neighborhood and model for artist-led gentrification.

Huang's "Heaven on Fourth" debuted as a requiem for Song Yang, a Chinese immigrant sex worker who committed suicide in Flushing, Queens, and told her story through multiple narratives in a specially designed exhibition space and bar.