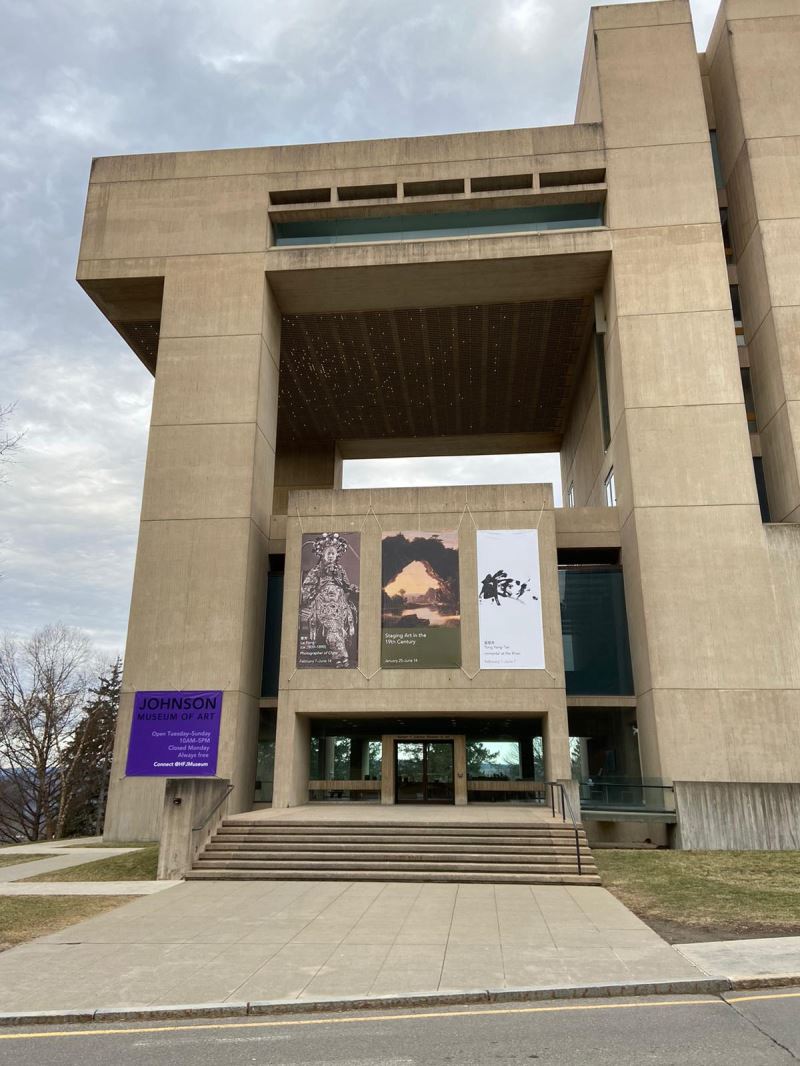 Cornell University's Johnson Museum of Art collaborated with the Taipei Cultural Center in New York to bring works by Taiwan's foremost contemporary calligrapher Tong Yang-tze (董陽孜) to Ithaca, New York. As part of the "Tong Yang-Tze: Immortal at the River" exhibition, which includes a monumental 54-meter-long work on display through June 7, Tong held an Artist's Talk via Skype from Taiwan to interact with viewers on March 8.

The video session began with an introduction by Pan An-yi (潘安儀), an associate professor at Cornell's Department of the History of Art and Visual Studies, who explained the concept and content of the exhibition and showcased a special short clip of Tong's creative process that was filmed in her studio.

"Word art conveys strong messages, which clearly express my intent," said Tong, explaining that lettering is culturally rich because it was rooted in traditional art before developing its contemporary forms. Tong added that art is her life and she wants to continue to explore multifaceted art creations that integrate multi-disciplines such as writing, music, and dance. "The curves of the human body and calligraphy lines can echo and reflect each other, much like the choreography of Lin Hwai-min's (林懷民) 'Cursive: A Trilogy (行草三部曲),'" she added.

The viewers were amazed that Tong was able to create her signature large-scale art pieces in such a small studio, and Tong emphasized that creating infinite works in small spaces was a personal challenge.

Taipei Cultural Center in New York Director Chang Hui-chun (張惠君) remarked that Tong received education in both Taiwan and the United States, learning the aesthetics of calligraphy and contemporary visual arts to develop her own unique style. In recent years, she has integrated new media, fashion, and other interdisciplinary fields to create one-of-a-kind works. Tong's name carries prominent status in Taiwan, Chang added.

"Immortal at the River (臨江仙)" was inspired by a poem written Yang Shen (楊慎, 1488-1559): "The great flowing Yangtze River always runs east, whitecaps drowning our heroes in their spray." The poem of 60 words conveying the emotions of the heroes of the enduring novel "Romance of the Three Kingdoms (三國演義)" was transcribed through grand, billowy, and airy calligraphy brushstrokes. The exhibition has been very popular and attracted many fans and viewers since its launch.

The exhibition was co-curated by professor Pan and Ellen Avril, chief curator and Asian art curator at the Johnson. In addition to the calligraphy displayed at exhibition, there were also choreographic interpretations of Tong's "Sao (騷)" and other crossover works presented by Locally Grown Dance on Feb. 27 and by the students of the Department of Performing Media Arts of Cornell University from March 5 to 7, which were all well-received.