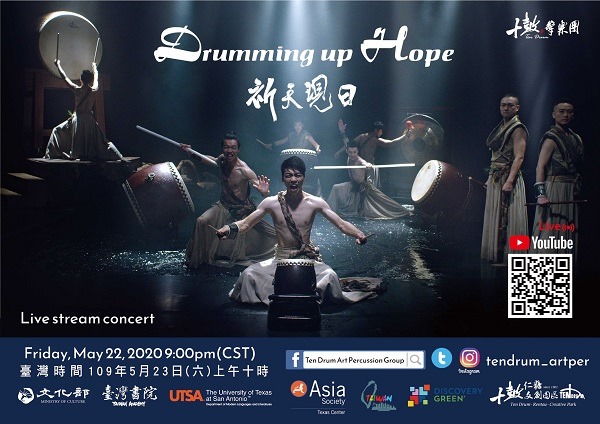 Taiwan's Ten Drum Art Percussion Group (十鼓擊樂團) has taken the online route to boost public morale amid the pandemic with its live-streamed feast of lights and sounds on May 22.

Themed "Drumming up Hope," the online 10-piece concert saw performing artists from the band beating man-sized drums as the centerpiece showcase on YouTube and Facebook, while the group performed in real time in Taiwan.

The 75-minute concert, which was made possible by the Taipei Economic and Cultural Office in Houston, Discovery Green, and Asia Society Texas Center, featured two Ten Drum subgroups performing dual roles to interpret darkness and brightness, in hope of bringing audiences home and abroad through the dark night of challenging times and greet the first light of hope.

The concert also aims to portray Taiwan's vibrant culture and landscapes through a series of original drumming techniques and new rhythms, troupe director Hsieh Shi (謝十) said on May 20.

While the rapidly spreading virus has exacerbated the vulnerability of the world, Taiwan can afford to offer a helping hand against the epidemic, as its prevention efforts have proven more than effective, the director said.

Through the virtual performance, Ten Drum Art Percussion Group seeks to share their encouragement and good will with the American people and the global community, and also to strengthen the artistic exchanges between Taiwan and the United States as well as highlight Taiwan’s cultural influence, Hsieh said.

The group was originally scheduled to tour in the United States in September, but dates were postponed indefinitely upon the arrival of COVID-19 earlier this year. To fans' delight, the troupe decided to go virtual.

Since its founding in 2000, Ten Drum Art Percussion Group has staged hundreds of performances around the world. Its album "Drum Music Land (鼓之島)" was nominated for Best Traditional World Music Album at the 2010 Grammy Awards, and for Best World Traditional Album at the 9th Independent Music Awards.

To promote local culture and invigorate Taiwanese percussion art, the troupe has produced many pieces that present Taiwanese history, folktales, and culture through diverse drum performances.