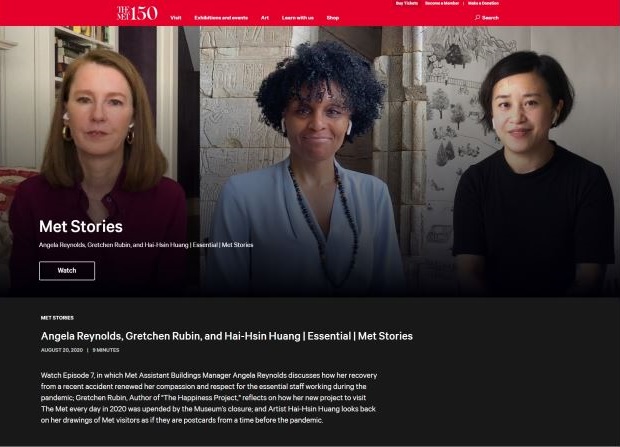 Taiwanese artist Huang Hai-hsin (黃海欣) shared her personal attachment to the Metropolitan Museum of Art (The MET) in "Met Stories" on Aug. 20, a new video series that shares unexpected and compelling stories gathered from people who visit The Met, according to the New York-based museum.

In the clip, now available on the museum's website, the Brooklyn-based artist looked back on her drawings of Met visitors as if they are postcards from a time before the coronavirus outbreak. Her artworks draw parallels between the museum of great popularity and the buzzing night markets in Taiwan – both are top travel destinations.

Living in New York for thirteen years, the Taipei-born said in the video that she still feels like an outsider. The illustrator said, as she doesn't speak perfect English, she communicates with the world through her creations. For her, The Met is not only a safe haven, it is also a place where much of her inspiration comes from.

"Coming to The Met, I feel really safe, it's like 'oh, I'm home'," Huang said, adding that the museum's lobby and entrance are nearly as crowded as night markets in Taiwan.

"You just see everyone waiting to enter somewhere, like different spaces…since I visit The Met so much, I didn't really necessarily look at arts. Mostly I'm looking at visitors. It is very inspiring because of the setting itself, it's like a stage already. So people entering the space, it's like a theater," the painter went on.

Many artists are hit hard by COVID-19, Huang, who came back to Taiwan for a solo exhibition in Dec. 2019, is no exception.

"I'm temporarily stuck here, I feel really sad, and I miss New York, especially The Met and my routine. At the same time, I also sometimes feel like, 'Oh, Met closed, so I don't need to go back'… [so it's] no rush, once The Met opens, I can go back," Huang said.

After graduating from the National Taipei University of Education in 2007, Huang went on to receive a MFA degree from School of Visual Arts in New York in 2009. In addition to being a regular participant in the New York Art Book Fair, Huang's artwork "The Met" has made a splash in the art community in New York. Her two albums of paintings – "There is No Future" and "Now is the Past" – are part of the museum's collections.