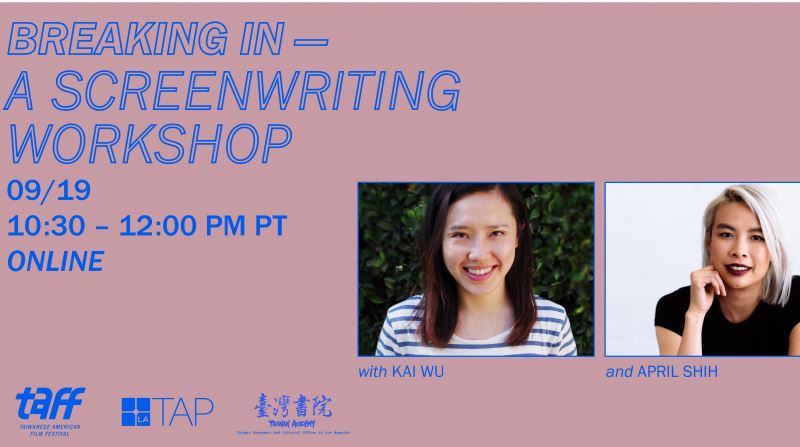 The 4th Annual Taiwanese American Film Festival (TAFF), led by Taiwanese American Professionals - Los Angeles (TAP-LA) with support from the Ministry of Culture of Taiwan and Taiwan Academy in Los Angeles, launched in October this year. After two successful virtual outreach events held in May and July, TAP-LA presented its first online workshop "Breaking in: A Screenwriting Workshop" on September 19th.

"Breaking in: A Screenwriting Workshop" focused on different screenwriting styles, how to find representation, and how to embrace writer's block. The workshop was moderated by executive director Cindy Lu, and featured guest contributors Kai Wu and April Shih.

Special guests Kai and April also discussed their journeys as screenwriters, and shared their recommendations for emerging screenwriters. The workshop offered screenwriting pitches with attendees, each 15 minutes, followed by a Q&A via Zoom speaking rooms.

Kai Wu (吳凱毓, also known as Wu Kai-yu) is a Taiwanese-American television writer and creator of "The Ghost Bride," a 2020 Taiwanese-Malaysian Netflix Original series. She was most recently a Co-Executive Producer on "Paper Girls" at Amazon and prior to that, she was a Co-Executive Producer on Amazon's "Carnival Row." Her previous writing credits include "Deception" (ABC), "Time After Time" (ABC), "The Flash" (The CW) and "Hannibal" (NBC). Additionally, Kai has developed for cable channel Freeform and currently has a pilot at Amazon.

April Shih (石圓圓) is a Los Angeles-based television writer, producer, and filmmaker. April has produced several films and plays including the award-winning revival of "Kiss of the Spiderwoman: The Musical."

She has written for FXX's critically acclaimed comedy starring Cate Blanchett "You're the Worst, Mrs. America," "Undone" (Amazon), and "Evel," a forthcoming limited series about Evel Knievel on USA channel. Currently, April is a Supervising Producer on FXX's "Dave."

April also has a half-hour series in development at FX with Larry Wilmore and is writing the feature film adaptation of Weike Wang's novel "Chemistry" for Amazon Studios.

For more information about the workshop and registration, please visit here.